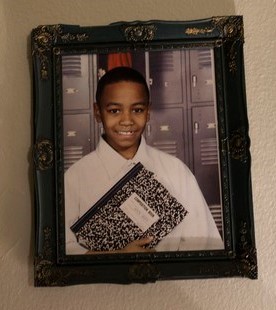 Portrait of Deion Fludd at his mother's home
© Andrew Hinderaker, Fair use image

On July 12, 2013, 17 year-old Deion Fludd passed away as a result of complications from blunt-trauma injuries after being attacked by New York Police Department (NYPD) officers. Raised in the Red Hooks projects of Brooklyn, New York, Deion was the middle child of five.  His parents were Karen Fludd and Michael Fludd and he attended Sunset Park High School and Parkside Academy in Brooklyn with aspirations to become a professional basketball player.

On the evening of May 5, 2013, Fludd and his girlfriend, Hesha Sanchez, were stopped by four rookie New York Police Department officers in the Rockaway subway train station. Sanchez had left her MetroCard at home but was only planning to stay with Fludd until his train arrived. Hence, they both squeezed through the turnstile on Fludd’s single payment. The officers suspected both of them of fare evasion and demanded they provide proof of identification. The two teens complied and attempted to explain that Sanchez did not intend to ride the train.

Despite their pleas, Sanchez was put in handcuffs. When Fludd realized he was under arrest, he ran away, fearing serving a year in jail. Because of prior incidents, Fludd was on probation and any violation meant he would be tried as an adult and probably imprisoned. Although the four officers were outside of their designated areas of patrol, they chased him. He sprinted to the end of the platform and with limited options, jumped down to the train tracks and continued to run north to the next platform. Sgt. Samuel Negron instructed his officers not to continue pursuing Fludd after they called him for guidance.

According to the NYPD, Deion Fludd was hit by a passing train as he was running down the tracks. The next day, doctors declared him a quadriplegic, paralyzed from the neck down. When he woke up cuffed to his bed, he told his family that he was not hit by a train and that he made it to the next platform at the Ralph Avenue station. He said after he was spotted by other officers and while he climbed onto the platform, he was hit on the back of his head with a flashlight, had his back stomped on, and was carried back to the train tracks by the officers.

Two days after being sent to rehabilitation and 68 days after the subway arrest, Deion Fludd passed away. The Fludd family filed requests for surveillance camera footage from both platforms but they were unable to obtain evidence of what occurred that evening. Due to the lack of evidence to support Fludd’s story, NYPD’s Internal Affairs Bureau closed the investigation of the officers’ conduct three days after the incident. The officers responsible for attacking him were never held accountable for their actions.

Karen Fludd sued the city of New York, the NYPD, the two officers who stopped Deion on the second platform, and their lieutenant. The case is still in litigation.