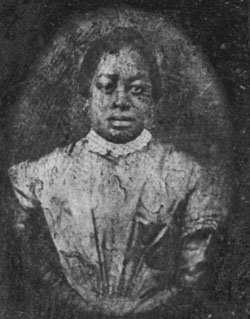 Elizabeth Thorn Scott Flood, born a free woman in 1828, is known as the mother of desegregated education for children of color in California. Flood led the battle to open the public schools of California to her own children and paved the way for integrated public schools throughout the state.

Elizabeth Thorn received her education in New Bedford, Massachusetts. She and her husband Joseph Scott came west during the gold rush era to Placerville, California. After Joseph died, Elizabeth and her young son moved to Sacramento in the early 1850s which, along with San Francisco, had a sizable black community.

Elizabeth Thorn Scott’s son was not allowed to enter Sacramento’s public school.  Scott’s first response was to open a private school for her son and other black children in the city.  That school was established on May 29, 1854 in her Sacramento home and was soon open to Native American and Asian American pupils as well. The Sacramento School Board offered to assume the administration of the school as a segregated institution although it did not commit public school tax revenue to support the school.  Despite this limitation Scott and other black parents accepted the arrangement and in 1855 the school opened as part of the Sacramento school system.  Scott continued to teach at the school and became the first African American public school instructor in California history.

In 1855 Elizabeth Scott married her second husband, Isaac Flood.  The couple moved to Brooklyn, a community just outside Oakland, California.  In 1857 Elizabeth Flood began a second school for black children in her new home.  One year later Flood helped establish Shiloh African Methodist Episcopal (AME) Church in Oakland, the first AME church in the city which eventually took control of her school.

In 1867 Elizabeth Thorn Scott Flood died at the age of thirty-nine.  She did not live to see integrated education in California but her youngest daughter, Lydia Flood, was among the first students to attend Oakland’s integrated public school in 1872.