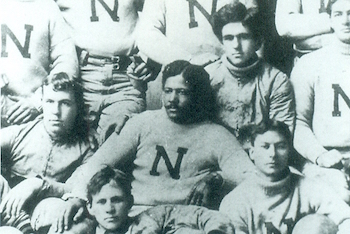 George Albert Flippin, born in Point Isable, Ohio, in 1868, was a prominent athlete and physician in Nebraska, who broke racial barriers in collegiate football and medicine for African Americans. The product of an interracial marriage, George’s father, Charles Albert Flippin, had served as a black physician in Ohio. Rather than work in the shadow of his father, George Albert Flippin migrated to Stromsburg, Nebraska, where he attended the University of Nebraska at Lincoln.

In 1898 Flippin began medical training at the College of Physicians and Surgeons in Chicago, Illinois. Although Flippin had shown little interest in his academic work at the University of Nebraska, by the end of his second year, he was deemed in “excellent standing” by the medical school’s dean. Indeed, Flippin graduated in April of 1900 and worked briefly as an intern at Cook County Hospital in Chicago. From there, he moved to Pine Bluff, Arkansas, where he established a medical practice, but in 1903 he returned to his hometown, Stromburg, Nebraska, and practiced medicine there for the remainder of his life. The majority of Flippin’s patients in this largely Swedish community were white, but he established a successful practice. Flippin converted a private residence into the Maywood Hospital, employed a Swedish nurse, and served residents in Stromsburg and throughout Polk County, Nebraska.

Flippin’s status as a physician did not always protect him from racial discrimination. In one instance, he sued a York, Nebraska, café that refused to serve him and won a hundred-dollar judgment in court. On another occasion, Flippin was accused of performing an abortion on a woman who subsequently died under his care. Flippin denied the accusation, and the unsubstantiated charge did not apparently damage his medical practice.

Although not a racial activist, George Albert Flippin broke ground on both the gridiron and in the field of medicine in the West. That he was accepted and respected by the majority of residents in a predominantly Swedish community in the early twentieth century was no small matter. Flippin practiced medicine until his death in Stromburg in 1929. He was inducted posthumously into the University of Nebraska Football Hall of Fame in 1974. His life provides a window on the interplay between race and class in the West during the early twentieth century.