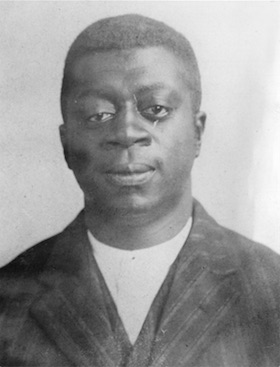 Benjamin Fletcher, born in Philadelphia, Pennsylvania in 1890, was the most important African American in the most influential radical union of his time, the Industrial Workers of the World (IWW).

Fletcher became active in the IWW while working as a longshoreman, loading and unloading cargo ships. In 1912, he joined the union, nicknamed “the Wobblies,” and Socialist Party. Quickly, Fletcher became a popular leader and speaker, winning many accolades for his oratory style and arguments for overthrowing capitalism, the Wobblies’ ultimate goal.

Fletcher was the most prominent leader of Local 8, the IWW branch of Philadelphia longshoremen, organized in 1913. Fletcher and his union seemed to prove one of the Wobblies’ central tenets: the union could overcome racial and ethnic divisions that employers encouraged. Local 8 consisted of African Americans, West Indians, European Americans, and European immigrants. The union integrated work gangs, meetings, social gatherings, and leadership posts—all unusual in American labor history.

During World War I, Fletcher and other IWW leaders were targeted by the federal government because of the union’s anti-war stance. Though Local 8 called no strikes during the war, the government feared its power and more generally the influence of the IWW. Fletcher was the sole African American among over one hundred Wobblies tried and convicted for treason in 1918. Though no evidence was brought against him specifically, Fletcher was sentenced to ten years in a federal penitentiary and a $30,000 fine. As the judge announced the sentences, Wobbly leader “Big” Bill Haywood reported, “Fletcher sidled over to me and said: ‘The Judge has been using very ungrammatical language.’ I looked at his smiling black face and asked: ‘How’s that, Ben? He said: ‘His sentences are much too long.'”

Fletcher served three years in federal prison, but his sentence was commuted in 1922. Fletcher’s release became a celebrated cause among black radicals, championed by The Messenger, co-edited by A. Philip Randolph and Chandler Owen. Afterwards, Fletcher remained committed to IWW ideals, though never again played an active role in the union.

Ben Fletcher died in Brooklyn, New York in 1949, but the union he led, Local 8, became a model for the effort to establish interracial equality in the early 20th century.