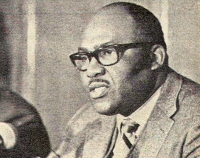 Arthur Fletcher is perhaps best known as the Father of Affirmative Action for his authorship of the Revised Philadelphia Plan, which required federal government contractors to hire ethnic minorities.

Fletcher was born in Phoenix, Arizona on December 22, 1924, to Britt Allen and Edna Miller.  Miller, a trained nurse, later married Andrew Fletcher, a career military man who adopted Arthur and his brother.  Arthur Fletcher grew up in Arizona, Oklahoma, and Kansas.  He joined the Army in 1943 and fought in Europe in World War II until he was wounded in 1945.  He then attended college on the G.I. Bill at Washburn University in Topeka, Kansas.  After he graduated in 1950 with a bachelor’s degree in sociology, Fletcher played defensive end for the Los Angeles Rams, and was the first black player for the Baltimore Colts.

Fletcher’s political career began in Kansas where he organized the black vote for Republican gubernatorial candidate Fred L. Hall in 1954.  Hall’s success resulted in a job for Fletcher in the state highway department.  The job gave him his first glimpse at the lucrative world of government contracts, which he tried to steer toward blacks.

Fletcher’s wife Mary, whom he married soon after high school, was the mother of his five children.  Mary committed suicide in 1960 while the family was living in California.  Decades later, Fletcher publicly attributed his late wife’s unhappiness to the problems he’d had finding and keeping work.  His wife’s death became part of his argument in support of programs like affirmative action.

Fletcher re-married in 1964, and moved with his new wife, Bernyce, and two youngest children to Pasco, Washington where he took a job with the Hanford atomic energy facility.  He also organized a community self-help program in predominantly black East Pasco, and landed a seat on the Pasco City Council.  In 1968, Fletcher ran for Lieutenant Governor of Washington State, and narrowly lost to the incumbent, John Cherberg.  Fletcher was the first African American in Washington and the West to contest for a statewide electoral office.  His close race for Lieutenant Governor got the attention of newly-elected President Richard Nixon, and Fletcher won a job in the incoming administration as Assistant Secretary of Labor.

Meanwhile, nepotism and discrimination were keeping blacks out of skilled-labor government contract work in Philadelphia.  A federal plan to remedy the situation was voluntary, and had been determined to be unenforceable.  So Fletcher authored the Revised Philadelphia Plan in 1969.  For the first time, federal bid specifications required contractors to make good-faith efforts to hire ethnic minorities, or face sanctions.  Nixon praised the plan publicly, and extended it to other cities.  Privately, though, Nixon worried that the plan alienated his conservative constituency.  Nixon asked Fletcher to resign in 1971.

Fletcher then became Executive Director of the United Negro College Fund in 1972, a post he held until 1976.  The popular UNCF slogan “a mind is a terrible thing to waste” was coined during his tenure.

In 1978 Fletcher unsuccessfully challenged Marion Barry for Mayor of Washington, D.C.  He later took an advisory role in the administration of Ronald Reagan.  In 1990, George H.W. Bush appointed Fletcher Chairman of the U.S. Civil Rights Commission.  As Fletcher’s term on the Commission ended, in 1995, he ran for the Republican nomination for President, largely to create a platform to argue against conservative challenges to affirmative action.  He grew increasingly disenchanted with the Republican Party as the term “affirmative action” became anathema in conservative circles, and as its applications faced legal challenges.  Arthur Fletcher died in Washington, D.C. on July 12, 2005 at the age of 80.