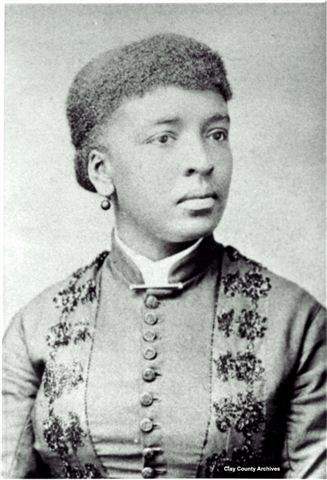 Louise Cecelia Fleming, the first African American to graduate from the Women’s Medical College at Philadelphia, Pennsylvania, was born January 28, 1862 to slave parents on a plantation near Hibernia in Clay County, Florida.  Her father is unknown; she was raised by her mother who served as a maid in the plantation house.  As a child she travelled along with her owners and her mother to Jacksonville, Florida to attend Bethel Baptist Church, which in 1859 had a membership of 40 whites and 250 black slaves.  In 1865, immediately after the Civil War, the white and black members of the church separated and formed their own congregations.

Lulu Fleming completed her basic education and trained to become a teacher.  She first taught in public schools near St. Augustine, Florida. In 1880 a visiting Brooklyn, New York minister, impressed by her knowledge of scriptures and her teaching, encouraged her to attend Shaw University in North Carolina.  Fleming graduated from Shaw as class valedictorian on May 27, 1885.  One year later she received a request from the Women’s Baptist Foreign Missionary Society to be their first representative (teacher) in the Congo.  Fleming accepted and became the first black woman appointed to serve as a missionary-teacher.  She used her position to send Congolese students to Shaw University.  The first of these students, Estey Carolina, arrived at Shaw in 1888 when she was 14.  Fleming’s work was interrupted in 1891 when she became severely ill and was forced to return to the United States.

Reflecting on her illness in Congo and aware of the limitations in medical care for her own treatment and the treatment of the general population, Fleming decided to enroll in The Women’s Medical College in Philadelphia in 1891, becoming the first African American to attend the institution.  While there she received tuition assistance from the American Baptist Missionary Society and graduated in 1895.

Upon graduation Dr. Fleming was appointed by the Women’s Missionary Foreign Mission Society to serve as a medical missionary to Upper Congo.  She was first assigned to the Irebu mission station; when it closed in 1898, she was reassigned to the Bolengi Station.  Fleming was unique in what now was the Belgian Congo in that she was the only black woman doctor in the vast colony which was nearly one-third the size of the United States.  Fleming was also known for the quality of the care she provided and for her training of dozens of young Congolese women and men in basic medical skills so that the people of the region had localized access to care.

Louise Cecilia Fleming worked in the Congo for four years before contracting African sleeping sickness.  She returned to Philadelphia and died there on June 20, 1899. She was 37.