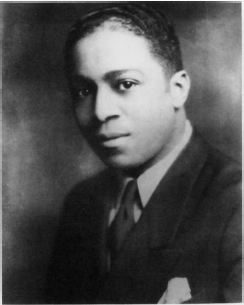 Rudolph Fisher was a physician, orator, music arranger, and writer during the Harlem Renaissance. While published in many medical journals, his literary work graced the pages of Redbook and Story Magazine. His first short story, “City of Refuge,” which depicted the clashes between the newly arrived southern African Americans and Harlem’s black society, was published by the Atlantic Monthly in 1925. With its appearance, Fisher became the first of the Renaissance writers to enter the mainstream press. His second novel, The Conjure Man Dies, published in 1932, is still considered to be the first known crime novel ever written by an African American.

Fisher’s father, Rev. John Wesley Fisher, was a Baptist minister who often moved his family. Fisher was born during one of those moves, on May 6, 1897 in a Washington, D.C. hospital. His parents (mother, Glendora Williamson Fisher) finally settled the family, including two other siblings, in Providence, Rhode Island. There, Fisher graduated from Classical High school in 1915 with honors and entered Brown University. He studied English and then Biology. While at Brown he became a successful orator, winning many competitions including the inter-collegiate oratory contest at Harvard University. Fisher graduated Phi Beta Kappa and Sigma Xi. He earned his B.A. and M.A. in 1919 and 1920, respectively.

In 1924, Fisher graduated summa cum laude from Howard University‘s School of Medicine. After a brief internship at Howard’s Freedman General Hospital, he began studies at Columbia University, specializing in biology and roentgenology, the use of X-rays for diagnosis of disease. He also taught embryology at Howard University’s Medical School from 1920 to 1924. In 1924 Fisher married Jane Ryder, a Washington, D.C. schoolteacher. The couple had their only child, Hugh, in 1926, whom Fisher nicknamed “The New Negro” as a tribute to the Harlem Renaissance. In 1926 Fisher moved to New York, to become a fellow of the National Research Council at Columbia University’s College of Physicians and Surgeons. He later opened a private practice in Harlem in 1927.

Fisher’s work was published by many black papers, including the National Association for the Advancement of Colored People’s (NAACP) Crisis Magazine. Fisher was later awarded the Spingarn Medal for his short story in Crisis entitled “High Yaller” which described color consciousness among African Americans. His first novel, The Walls of Jericho, which depicted life in Harlem, appeared in 1928.

Fischer was developing The Conjure Man Dies into a play, but died of intestinal cancer at age 37, on December 26, 1934, before the manuscript was completed. His death was attributed to his own X-ray machines. Colleagues Countee Cullen and Arna Bontemps revised the manuscript, which was produced at the Lafayette Theatre in Harlem and the Federal Theatre Project in 1936. At his death he had published two novels, a play, several sketches, numerous short stories, and a number of essays.