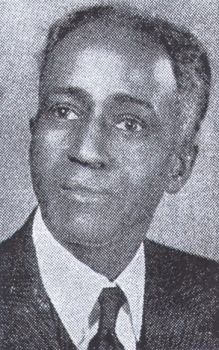 Historian, educator and clergyman Rev. Miles Mark Fisher was pastor of the White Rock Baptist Church in Durham, North Carolina from 1933 to 1965. He published a number of important scholarly works on African American culture and the Baptist missionary movement to Africa. In 1953 the American Historical Association honored one of his books with its prize for outstanding historical volume of the year.

Fisher was the youngest child born to Rev. Elijah John Fisher and Florida Neely Fisher, in La Grange, Georgia. The family moved to Chicago in 1903 when Rev. E.J. Fisher accepted a pastorate at the Olivet Baptist Church, one of the largest black churches in the city. Florida Fisher was an active leader among the female congregation at Olivet until her death in 1931. Both Miles and his eldest sister Mary (Mattie) pursued careers in church work. Mattie became a Baptist missionary while Miles followed his father’s path as an ordained minister. In 1930 Miles married Ada Virginia Foster, the daughter of a post office clerk.

Throughout his life Rev. Miles Fisher combined his vocation as a minister with his work as a scholar and historian. He graduated from Morehouse College in 1918. In 1922 he earned a Bachelor of Divinity degree from Northern Baptist Theological Seminary and a Master of Arts degree from the University of Chicago. Fisher went on to teach English and ecclesiastical history at Virginia Union University in 1922. Six years later he left the university to accept a position as pastor of the Sixteenth Street Baptist Church of Huntington, West Virginia. Beginning in 1933 until 1965 he served as pastor of the White Rock Baptist Church in Durham, North Carolina. He also taught at Shaw University until his retirement in 1965.

Fisher’s most notable publications included his first book, a biography of his father entitled The Master’s Slave – Elijah John Fisher. He also wrote a biography of the nineteenth century black missionary Lott Carey and a book on slave songs based upon his dissertation. Fisher’s Negro Slave Songs, published in 1953, won the American Historical Association prize for the best book of 1953. In it he argued that slave songs carried a double meaning, invoking Biblical references to the book of Exodus to encourage slaves to escape from bondage.