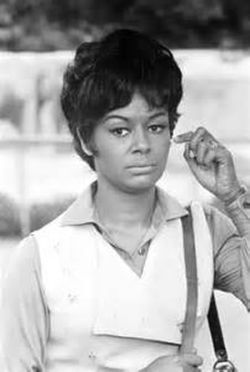 Gail Fisher was already a popular model in African American newspapers and magazines, as well as a theater actress when, in the late 1950s, she starred in The New Girl in the Office, a film about integrating a hitherto all-white office staff of a white-owned company. The film was inspired by new federal equal employment policies under President Dwight Eisenhower’s President’s Committee on Government Contracts, an agency he created to encourage nondiscrimination enforcement.

In an advertisement for All laundry detergent in the early 1960s Fisher was the first black person to have speaking lines in a nationally televised commercial. One of the first black women to get substantive roles on television, Fisher was primarily known for playing “Peggy Fair” from 1968 through 1975 on the popular television show Mannix. Fisher was the second black actress, after Nichelle Nichols of Star Trek, to get a role in a dramatic hour-long network television series.

The youngest of five children, Fisher was born on August 18, 1935 in Orange, New Jersey. Her father, a carpenter, died when Fisher was two years old.  Fisher’s mother, Ona Fisher, supported her children by operating a hair styling business out of their house in Edison Township, New Jersey.

Fisher was a cheerleader at Metuchen High School, where she got a leading role in the school’s senior play. As a teenager Fisher started entering and winning beauty contests, including Miss Black New Jersey.  Fisher was crowned Miss Essex County Fair and subsequently became the first black semifinalist in the New Jersey State Fair beauty contest. With the encouragement of Moss Kendrix, an African American public relations pioneer and press agent for Coca Cola, Fisher entered and won a Coca Cola contest that gave her a two-year scholarship to the American Academy of Dramatic Arts in New York.

Fisher’s first television role was in 1959, on the program Play of the Week.  In 1962 Fisher became the first African American accepted to New York’s Lincoln Center for the Performing Arts Repertory Theater. Fisher studied with the famed acting coach Lee Strasberg, and worked with directors Elia Kazan and Herbert Blau. In 1965 Blau cast Fisher in Danton’s Death.

Besides playing her signature role in Mannix, Fisher made guest appearances on other television series such as The Defenders and The Nurses, and on the daytime drama, The Doctors. Fisher also appeared in Lorraine Hansberry’s classic play, Raisin in the Sun, and she was an understudy to Ruby Dee in the play Purlie Victorious.

In 1964 Fisher married pioneer jazz talent manager John Levy, with whom she had two daughters, Jole and Samara. The marriage to Levy ended in divorce in 1972. Fisher was briefly married to Robert A. Walker in 1973, before another divorce ensued.

Fisher rarely appeared on television after Mannix ended in 1975.  Her health started to deteriorate, and she was addicted to drugs. Fisher died of renal failure in a hospital in Los Angeles, California on December 2, 2000. She was 65.