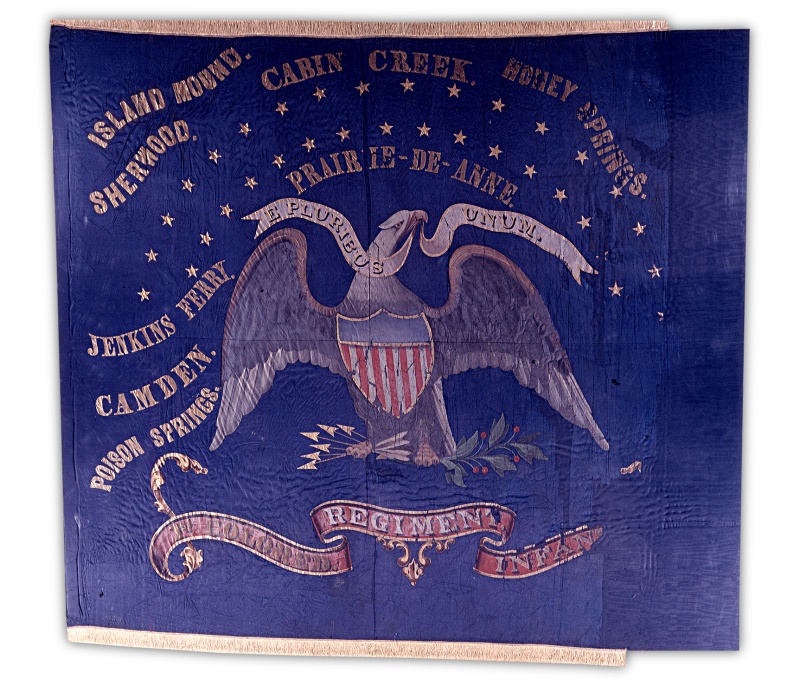 The First Kansas Colored Infantry Regiment was established through the efforts of James H. Lane, the U.S. Senator from Kansas from 1861 to 1866. As Kansas joined the Union on the eve of the Civil War in 1861, Lane recruited African-Americans to fight against the Confederacy. He called for all able-bodied African-American males between the ages of 18 and 45 to join what he termed “The First Kansas Colored Infantry of the Liberating Army.” If his recruitment tactics did not mobilize volunteers, he would resort to paying for seized Missouri slaves who were brought to Kansas.

Joining the Infantry, however, had its benefits. African-Americans who joined were promised $10.00 per month as well as improved conditions, including clothing, rations, and adequate quarters. Also black enlistees and their immediate families were issued certificates of freedom. By 1862, the 600 enlistees of the First Kansas Colored Infantry were organized in Bourbon County near Fort Lincoln.

One of the first assignments, the Infantry was sent into northeastern Indian Territory to maintain Federal control over the region. They joined forces with the Army of the Frontier, which was significant because of its inclusion of Indian and white regiments.

The First Kansas Colored Infantry fought in the Battle of Honey Springs on July 17, 1863, the single largest Civil War in the Indian Territory. The black soldiers as part of the advancing Union forces were able to get within 40 yards of the Confederate line and hold their ground under heavy fire until the Confederates retreated.

The battlefield performance of these black soldiers persuaded Senator Lane to create a second black infantry unit.  The Second Kansas Colored Infantry Regiment was formed in 1863 and led by Colonel Samuel J. Crawford who later became a governor of Kansas. By 1865, however, Lane and Crawford’s regiments had brought in 2,083 African-American men to serve in the Union Army.

Although the Battle of Honey Springs was a defining moment for the soldiers, their victory and abilities were questioned at the battle of Poison Springs, Arkansas on April 18, 1864. The First Kansas Colored lost 117 dead and 65 wounded.  Its captured soldiers and those left wounded on the battle ground were executed by the Confederates.  This battle may have raised criticism and doubts about the service of black soldiers but their overall performance throughout the war and their contribution to the eventual Union victory are undisputed.