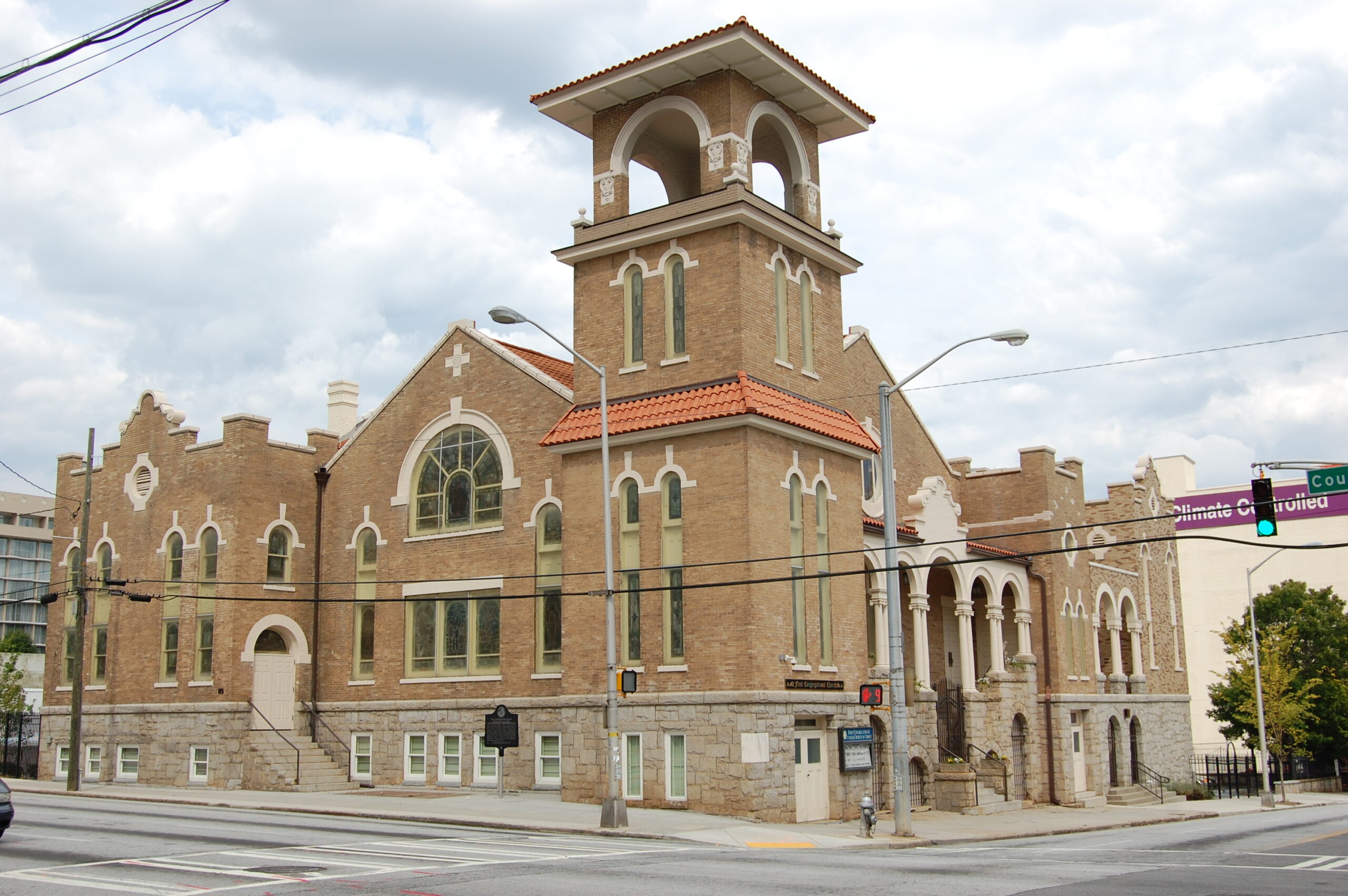 The First Congregational Church of Atlanta, Georgia, the largest Congregational church in the South, began as a “gathered church” on May 26, 1867. After being baptized, local formerly enslaved African Americans joined members of the mostly white congregation that met at the Storrs School Chapel. The American Missionary Association (AMA) established the Storrs School in 1865, in Atlanta, which provided classes, worship, and social services for former slaves and whites impoverished by the Civil War. Inspired by the worship services offered at the Storrs School, the ex-slaves petitioned for a church of their own. Land was donated to the congregation on the corner of Houston and Courtland Street, and a new “little red church” was built. Over the next decade, the congregation became primarily African American, while white members formed their own church.

In 1894, First Congregational Church called its first African American pastor, Dr. Henry Hugh Proctor, a graduate of Fisk University and Yale Divinity School, and former Elder at First African Presbyterian Church. Under Dr. Proctor’s leadership the present church building was completed in 1908. The groundbreaking ceremony was marked by the attendance of Booker T. Washington as guest of honor and former President Theodore Roosevelt visited the church in March 1911. The church structure is listed as a landmark on the National Register of Historic Places and is noted as a Georgia Historical site.

Over time First Congregational Church developed facilities and programs to meet the special needs of the surrounding neighborhood. They provided the first and for many years only gymnasium available to Atlanta blacks. Their home for young black single women was the only one of its kind in the city. The church’s employment bureau served blacks and whites. A water fountain outside the church available to all races, was the first public water fountain opened in the city. The trouble bureau was a clinic for medical ailments and a prison mission, one of the first in the nation, served those who were incarcerated.  There was a Music Festival that brought the best black musical talent to the city where they performed before racially integrated audiences.  The church also offered its members a day nursery, classes in domestic science, and industrial classes for the blind.

Organizations such as the Atlanta Interracial Commission, formed in 1919; the National Medical Association, organized in 1894; and the city’s first black Boy Scout troop were all created in First Congregational Church.  Additionally, the church maintained a 1,000 seat auditorium and a basement that housed Sunday school facilities, a library and a reading room, and a kitchen.

The Herndon family of Atlanta provided crucial support for First Congregational throughout most of the 20th Century.  Alonzo F. Herndon, the founder of Atlanta Life Insurance Company, and the city’s first African American millionaire, began that tradition of support which was followed by his son, Norris B. Herndon who succeeded him as President in 1927.  After the death of Norris Herndon in 1977, the support continued through the generosity of the Herndon Foundation.

In 1947, Reverend Dr. Homer C. McEwen followed Dr. Proctor as pastor.  Rare for black ministers at the time, but in keeping with the tradition the church established with the selection of Dr. Proctor, McEwen was highly educated. He was a graduate of Straight College (now Dillard University) and the Chicago Theological Seminary.  Ten years later in 1957 the Evangelical and Reformed Church, and the General Council of the Congregational Christian Churches of the United States merged to form the United Church of Christ. In 1961, First Congregational Church joined the new denomination.

First Congregational Church has had a number of other prominent members including longtime National Association for the Advancement of Colored People (NAACP) executive director Walter White and his family, the family of Ambassador and former congressman and Atlanta mayor Andrew Young, the family of Georgia Assemblywoman Grace Townes Hamilton, and Jesse O. Thomas, former director of the Atlanta Urban League.

The current Pastor is Reverend Dr. Dwight D. Andrews.  Under his leadership the church continues to have innovative programs including a highly esteemed music ministry which includes a chancel choir, jazz chorus and jazz vespers, gospel ensemble, youth and children choirs.  It also has the Church after Party for Youth program and a 55 Plus program as well as caregivers support groups.