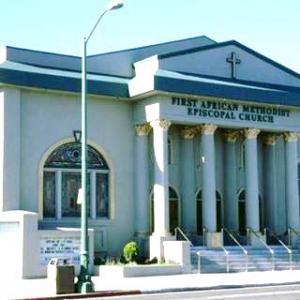 The First African Methodist Episcopal Church of Oakland, California emerged in the eastern part of the Bay Area in 1858. The congregation itself was founded by members of the black community in Oakland at the time, but it wasn’t until 1863 that they actually had a physical building to hold their services. The church founders collectively purchased what was then the Carpenter School House. First AME Church was literally the first, and still is, the oldest African American church in Oakland. During its time, it was the only African American church in the East Bay for thirty years.

When it was first built, First AME also served as the first school for minority children in Oakland, as all other public schools in Oakland were reserved exclusive for white children to attend. The school’s most distinguished teacher was Elizabeth Flood who also was a founding member of the church. Flood was educated in Massachusetts but moved to California with her husband. Prior to her teaching at First AME in Oakland, she opened up her own private school for black children in Sacramento because her son was denied an education by the public school system at the time.

The AME church also served as a gathering place for the black community in Oakland, the venue where social and political clubs and cultural organizations would hold meetings and where community events were staged and festivals were celebrated.

The congregation of First AME cycled through many other names before its current name was selected. Before the name was changed officially to First AME Church in 1954, the church was originally called Shiloh AME Church. After years of stationing their congregation in a carpenter school building, the leader of the congregation at the time, Reverend James Grisby, led the congregation in acquiring a larger building in 1884, where the name was changed from Shiloh AME Church to the Fifteenth Street Church. The congregation moved one more time in 1954 under the leadership of Reverend H. Solomon Hill, when it was finally named First African Methodist Episcopal Church. Since being moved in 1954, the church has been remodeled and improved multiple times, most notably after surviving the Loma Prieta Earthquake in 1989.