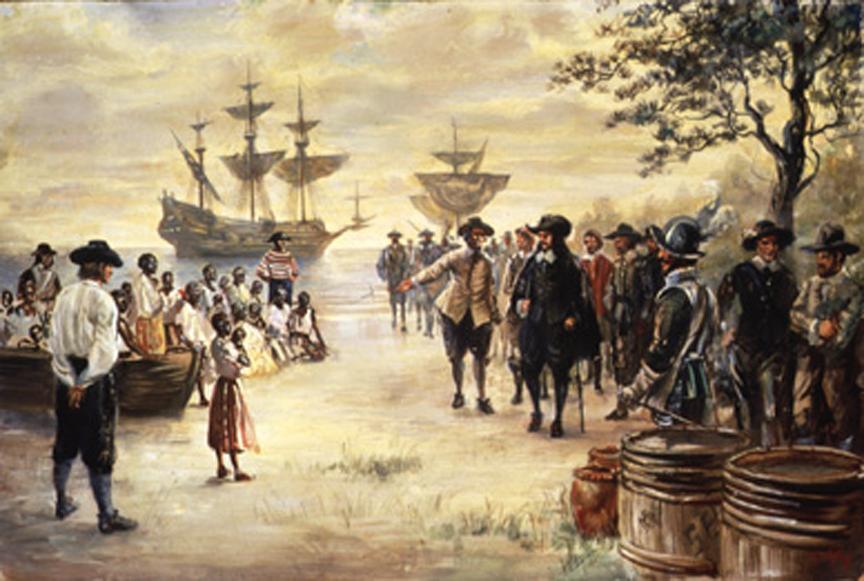 In 1619, 12 years after the first permanent English colony was established at Jamestown, Virginia, a small cargo of enslaved Africans arrived at the colony at Comfort Point near present-day Hampton, Virginia. Until recently, historians had misconstrued the circumstances of how this human cargo came to North America. We now know, however, that a Portuguese slave ship, the San Juan Bautista, which most likely was sailing from Africa, had 350 African slaves en route to Veracruz, Mexico.

The San Juan Bautista was robbed of its cargo off the coast of Mexico in 1619 by two English pirate ships, the Treasurer and White Lion, which was flying a Dutch flag. Each ship took approximately 20 to 30 slaves from the San Juan Bautista which was allowed to continue to Veracruz, where it presumably unloaded the remainder of its cargo. The two English ships, however, sailed toward the Jamestown colony and landed within four days of each other. At Jamestown, the captain of the White Lion traded the enslaved cargo for provisions since they were in critical need of supplies. The Treasurer sailed to Bermuda, an important slave depot, where it sold more enslaved people, but returned to Virginia several months later to trade the remaining nine or 10 people in its possession.

The first enslaved Africans, the “twenty and odd Negroes” as they were formerly known and described in a letter by John Rolfe to the Virginia Company of London, originated in Angola in Central Africa which at the time was a major exporter of slaves to Portuguese Brazil and the Spanish colonies. Angolan slaves also were sold to North American colonies, and a sizable number of Angolans would later be sold to colonial South Carolina as well as to Middle Atlantic and New England colonies.

Virginia’s first enslaved people spoke Bantu languages, and their homelands were the kingdoms of Ndongo and Kongo. They were in all probability urban people who had prior contact with Europeans and were connected to them by common languages. Since the Portuguese had conquered both African kingdoms in the 1500s, it is likely that most of these enslaved people who arrived in Jamestown had been baptized as Christians and were literate.

In 1624 the first named African woman appeared in the Jamestown colony’s records. Her name was spelled Angelo but she was also called Angela. She is listed in the household of Capt. William Pierce in the 1624 census of the colony although her occupation is not specified. We know that she survived both the famine in Jamestown and a Powhatan Indian attack on the colony, which killed about 350 settlers.

A number of these first enslaved people were freed after a relatively short tenure, usually seven years, which suggests that they most likely had the status of indentured servants. Racial slavery, therefore, was not imposed on these first Africans upon their arrival in 1619 but instead evolved over the next decades in Virginia and the rest of English North America.