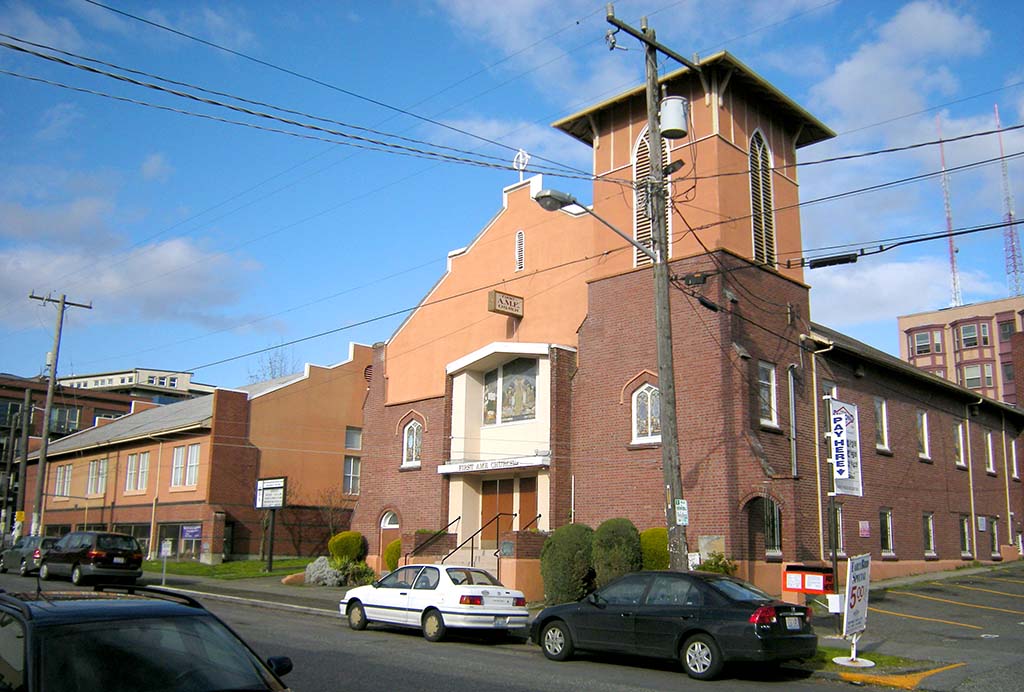 Established in 1886 when Washington was still a territory, the First African Methodist Episcopal (AME) Church in Seattle, Washington is the state’s oldest black church.  Initially, members began by meeting in each other’s homes.  These meetings eventually led to the opening of a home based Sunday School for children.

First AME began under the leadership of Seaborn Collins, a native of Georgia who arrived in Seattle in 1885.  In 1892 Collins, a machinist and carpenter, would become the first African American elected to office in King County.

In 1890 First AME was formally recognized as a church. Among its charter members were prominent black Seattleites including Collins, John Gayton, Charles Harvey, and Lucretia Roy.

In 1891 First AME was officially incorporated under the leadership of Pastor L.S. Blakeney.  Located in a house on what was then Jones Street in Seattle’s Capitol Hill neighborhood, the original name was Jones Street Church.  The current building at the same location, now 14th Street, was constructed in 1912 complete with Italian windows and custom pews.  First AME expanded its land holdings by purchasing two lots next to the church building in 1923.

The regional demand for labor during World War II caused Seattle’s African American population to swell in the 1940s, and the resulting increase in the size of First AME’s congregation exceeded the capacity of the building.  A major remodel of the property began in 1955 which increased the size of the sanctuary and added an educational wing.  The addition and renovation was designed and overseen by prominent local black Seattle architect Benjamin F. McAdoo.

In 1984, the Seattle Landmarks Preservation Board, a division of the Department of Neighborhoods, designated First AME Church a Seattle landmark.  In addition to its spiritual work the church is active in the community.  Since 1970 First AME has operated a housing corporation (FAME Housing Corp) consisting of several apartment buildings, including Bryant Manor at 18th Avenue and East Yesler Way.  It runs children’s educational programs including Education Enhancement, FAME Child Development Center, and Head Start programs at several locations. In 2011 the church opened the MLK Family Arts Mentoring Enrichment Community Center (MLK FAME Community Center).