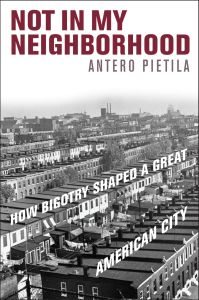 Not in My Neighborhood: How Bigotry Shaped a Great American City (Ivan R. Dee, 2010) by Antero Pietila
Fair use image

In the article below Antero Pietila, longtime reporter for the Baltimore Sun, describes his arrival as a Finnish immigrant in the United States as the nation was being convulsed by the Civil Rights Movement.  Pietila describes his initial introduction into the nation’s racial dilemma through Harlem and eventually his arrival in Baltimore in 1969, the city that would be his new home for the next four decades.  Over those decades both officially as a newspaper reporter and unofficially as the resident of a racially divided city, Pietila describes how his experiences led him to investigate the reasons for that strife.  His descriptions and conclusions became a broad racial history of residential housing and racial discrimination in the city of Baltimore which he titled Not In My Neighborhood: How Bigotry Shaped a Great American City.

The journey that eventually produced Not in My Neighborhood, my new book on race and real estate, began in May 1964 when I first saw America’s shores from the deck of the M/S Finntrader. I was a twenty-year-old aspiring journalist from Finland wanting so badly to spend that summer in the United States — the summer of Lyndon B. Johnson’s re-election campaign, civil rights strife, and of the New York World’s Fair – that I worked my ways across on a freighter. I came from a country so homogeneous that eye and hair color marked the chief differences among its four and a half million people. No blacks lived in Finland in those days, and the entire nation had only fifteen hundred Jews.

New York’s polyglot metropolis stunned me. While reporting one day in Harlem, I found myself naked and sweating in an old Finnish steam bath operated by an immigrant from Jamaica. It had been a popular gathering spot among residents of the Finnish community, which thrived in Harlem from the 1910s until the 1950s. Few traces of that population of several thousands survived. Rival socialist halls, including one with an indoor swimming pool and a bowling alley, were long gone, as were Finnish churches.

One vestige still remaining was a hat shop on 125th Street belonging to an elderly Finnish woman, who had stayed after other whites fled the area. Another relic was the steam bath, with its black owner, a professional masseur, at Madison Avenue and 122nd Street.

Harlem exemplifies racial succession, which is the sociologists’ term for ethnic, racial and economic neighborhood transition. In the space of four decades between the 1870s and 1910s, that section of New York City went from a white upper-class community of American-born residents to one populated by recent Irish, Jewish, German, Italian and Scandinavian immigrants. Soon thereafter, as a result of white abandonment, Harlem became African American and Puerto Rican, as Gilbert Osofsky chronicled in his 1971 classic, Harlem: The Making of a Ghetto. Racial succession is not over, either. Starting in the late 1990s, Manhattan’s overheated real estate market made Harlem’s values so irresistible that whites began returning to live on some streets north of Central Park.

The phenomenon of changing neighborhoods fascinated me.  In 1969, after receiving my M.A. degree in journalism from Southern Illinois University, Carbondale, I found an urban observatory in Baltimore, a declining but still-great city full of neighborhoods in the throes of racial succession. Recovering from the 1968 riots, the city and many of its residents were in a defeatist funk. Racial tensions flared, white flight to the suburbs continued; smokestack industries kept shutting down. I witnessed civil rights protests, reported on two Ku Klux Klan cross burnings, covered school desegregation, anti-war actions, religion, community organizing, both in the mostly black city and in surrounding white and suburban Baltimore County.  The remarkable racial and cultural divide between Baltimore City and Baltimore County in many ways reflected the differences across the United States.

Making this journalistic enterprise possible was The Sun, Baltimore’s venerable newspaper of record, founded in 1837. Owned by establishment families, the company also published The Evening Sun, the paper of H. L. Mencken, and a Sunday edition. The Sun was a mighty peculiar institution. A mural in its lobby depicted a plantation scene at the flagship paper’s founding, complete with manacled and shackled slaves. (It has since been covered with a false wall).

Standing guard near two lobby elevators was a diminutive African American named Bernard E. Barney. He had operated The Sun’s front elevators since 1925. Although automatic elevators were installed in 1950, Barney was still on duty when I arrived in 1969, making sure that the publisher got to his office without stops. Mostly, though, he just stood in the lobby, greeting visitors and employees as an institutional mascot of sorts. The newspapers’ paternalistic owners made bets in his name at racetracks and elsewhere, and he died a wealthy man. Another fixture was a janitor whose nametag identified him as “Johnson.” He came by the city room every afternoon, asking gentlemen reporters whether they needed a shoeshine.

All those observations probably should have served as a warning. Yet I was not prepared for a discovery I made in researching Not in My Neighborhood which became my history of residential bigotry from the Civil War to the subprime mess: Baltimore’s 1910 residential segregation law, the nation’s first, was enacted largely due to The Sun’s racial agitation. Among many Baltimore dailies, it was the only paper that was hung up on race.

The fortunes of The Sun had become intertwined with those of Roland Park, a “romantically planned” prestige suburb whose development from the 1890s until the 1920s uniquely occurred during the peak influence of two powerful social movements — Progressive politics and eugenics. By 1910, Charles Grasty, who had secured the original British financing for Roland Park, had become editor, publisher, and part-owner of The Sun. He lived in Roland Park on a street named after him.

Just months before the City Council’s residential segregation law was enacted, Roland Park attached restrictive covenants to deeds that barred blacks from residency. The Sun supported all means of segregation. “The white race is the dominant and superior race, and it will, of course, maintain its supremacy,” it editorialized at the time.

So when the African-American lawyer W. Ashbie Hawkins in the spring of 1910 bought a narrow three-story rowhouse near one of the city’s most prestigious residential areas, The Sun’s headline called the acquisition a “Negro invasion.” The paper began a campaign to segregate Baltimore’s neighborhoods, publishing fake stories and misinformation to spread panic. Maryland, which had hesitantly stayed with the Union in the Civil War, proved receptive. Democrats had already twice tried to take away black voting rights by referendum. Even though a third attempt would fail the next year, Baltimore became as segregated as any Southern city. Uniquely, even music was segregated. A separate “colored” park band existed until 1964. The city ousted blacks from classical concerts by establishing a “colored” symphony orchestra with seed money from a white donor. Two conditions were attached to the gift – “one that my identity remain concealed and the other that I will not have to attend any concerts.”

Spearheading this rising racism and anti-Semitism were leading Baltimore Progressives, many of whom shared not only a belief in white supremacy and eugenics but also in Confederate nostalgia. It was not an accident that the Maryland General Assembly in 1939 adopted as the official state song an old Confederate battle hymn. “The despot’s heel is on thy shore, Maryland!” it complains, exhorting Marylanders to “spurn the Northern scum!”

I began my book as a hobby. While working as a reporter among my sources were two veteran real estate brokers who, I discovered, had been key players in the large-scale racial change that began during World War II. They agreed to share their recollections and material with me. One of those aging blockbusters was white; the other was black. I quickly learned that while whites branded blockbusters as greedy panic peddlers intent on destabilizing happy neighborhoods, blacks, while recognizing the profiteering, saw blockbusters as agents of desegregation allowing them to move into better housing. This difference in interpretation split Baltimore’s civil rights movement along racial lines.

My key documentation came from the archives of the Baltimore Jewish Council (now in the Jewish Museum of Maryland). Its executive director from 1941 until 1975, Leon Sachs, was a diligent filer and copious note taker, capable of taking shorthand. I was also lucky to discover several private archives.

Not in My Neighborhood documents how eugenicists influenced the administration of Franklin D. Roosevelt to redline 239 cities and how that exercise sanctioned predatory lending and race-based flipping, which began on a large scale during World War II and continues in some cities until today.  This redlining helped create racially divided cities throughout the nation.

Anti-Semitism is also a recurring theme. The book describes anti-Semitism by whites, anti-Semitism by blacks, and anti-Semitism by Baltimore’s leading Jewish developers who refused to sell or rent to fellow Jews. The material is nothing short of explosive.
Sachs’s documents allow a detailed examination of black/Jewish tensions, which began in that pivotal year of 1910, when department stores were segregated, and intensified after Hitler came to power in the 1930s because many Baltimore Jews suspected the black civil rights leadership of anti-Semitism.

The final part of the book concerns Baltimore County, which eventually overtook the city in population. While the city became increasingly black, the county remained nearly exclusively white. This was no accident. County politicians systematically removed black neighborhoods through what professor Yale Rabin called “expulsive zoning.” As late as in 1972, Baltimore County Executive Dale Anderson ordered all real estate brokers to report to the police any sales or rentals they made to African Americans.

Pietila, A. (2010, April 30). From Finland to “Not in My Neighborhood”: Antero Pietila’s Journey To and Through Racially Divided America. BlackPast.org. https://www.blackpast.org/african-american-history/finland-not-my-neighborhood-antero-pietilas-journey-and-through-racially-divided-americ/