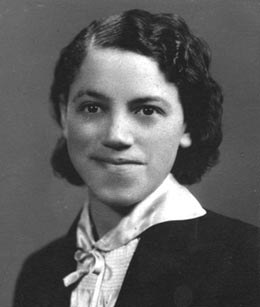 In the following account John C. Hughes, chief oral historian for the Washington State Legacy Project, discusses the life and legacy of Lillian Walker, who has been a civil rights activist in Bremerton, Washington, since World War II. Established in 2008 by Washington Secretary of State Sam Reed, The Legacy Project conducts oral histories and writes biographies of citizens “who have made extraordinary contributions to the political life of Washington State.”

Lillian Walker began staging civil rights sit-ins in the Naval Shipyard city of Bremerton in 1941 when thousands of newly arriving Negro war workers encountered “We cater to white trade only” signs practically wherever they went. Lillian and her late husband, James, promptly helped organize a branch of the NAACP. The signs started coming down.

The centennial year of the NAACP found her still in the trenches, spunky as ever at 95 and checking her e-mail regularly. When she was young, she dreamed of becoming a doctor, but she was born the wrong color and the wrong gender at the wrong time in the wrong place. Still, there’s no bitterness over the fact that she and James took on an assortment of part-time janitorial jobs for 40 years to make ends meet and give their kids a better life. Someone once asked her, “Why are you always smiling?” “Frowning and cursing,” she replied, “that’s not going to make you any friends.”

She has been “educating people,” as she puts it, about racial equality for as long as she can remember – from the school yard when she was 8 to a Woolworth’s soda fountain in the 1950s.

She is an icon in her community, with a host of friends who love and revere her. Her congressman says she personifies community spirit; the candidates for mayor want their signs in her yard. She has been alive for nearly a century of American history – and made history. There have been 17 presidents in her lifetime, from Woodrow Wilson to Barack Obama. She met the 32nd, Franklin D. Roosevelt.

In her lifetime, Lillian Walker has seen America move from lynching Negroes to electing them to its highest offices. Through it all, she has never stopped wondering why race matters. “I don’t see color,” she says. “I see each person as an individual.” To paraphrase a quip by President Obama, she sees herself as an All-American “mutt” – and she’s proud of it. She’s a fighter, too. Growing up in rural Illinois, Lillian won three bouts with diphtheria and three more with pneumonia. Then in 1982 she endured 22 radiation treatments for uterine cancer, using “humor therapy” to stay on the sunny side.

With an itinerant midwife and her grandmother assisting, Lillian Walker was born in 1913 in a shack on a 20-acre farm near Carrier Mills in rural Illinois. Her parents, Moses and Hazel Allen, were both of mixed race, “mulattoes” in the parlance of the Census. In all, they had 11 children, six of whom died young. Lillian’s father worked some of the time as a coal miner, but most of the time as a farmer. Like her siblings, Lillian learned early on to plant, plough and hoe, milk the cow, slop the pig, gather the eggs, chop kindling and rustle up something for the stew pot.

Lillian’s late husband was the grandson of slaves who “jumped over the broom” to formalize their marriage in Virginia. When he heard that Lincoln had signed the Emancipation Proclamation, James’ grandfather exclaimed, “Now I’m a man!”

When the Walkers arrived in Bremerton from Illinois in 1941, the city was on the threshold of stunning growth and culture shock. Bremerton’s population zoomed from 15,000 in 1940 to 75,000 by 1944, elevating it to the state’s fourth largest city. The newcomers were pitching tents, sleeping in cars, on park benches, even in chicken coops. Shipyard workers coming off the graveyard shift were bumping others out of boarding-house bunks.

Bremerton was home to about 100 blacks in 1940. By the summer of 1944, about 5,000 were working for the military at the Navy Yard, the Ammunitions Depot and the Torpedo Station. Uncle Sam had a far better track record of hiring blacks than Boeing or the civilian shipyards.

James began work as a shipyard electrical inspector and Lillian scored highest by far on the postal clerk exam and was appointed postmaster at Sinclair Park, the hilltop housing project for black Navy Yard workers. Then she gave up the prospect of a bright government career to have children. “My going places was lesser than being a mom,” she says. “I wanted to raise my kids. I wanted to instill me in them, not somebody else teaching them what they wanted them to be.” Exhibit A would be her son, James T. Walker Jr., Ph.D.  A Stanford graduate, he is an epidemiologist with the Centers for Disease Control in Cincinnati.

The Walkers worked at the black USO Club in the Labor Temple, one of the few places with a welcome sign for African American service men. Racism was rampant in the military, and the Shore Patrol and shipyard guards often looked the other way. Civil rights law, meantime, was a paper tiger in Washington State. There was a Public Accommodations Act, but no substantive penalties. That fact went largely unchallenged for years because prior to World War II, there had been few Negroes in Washington State – 2,500 at the turn of the century and still only 7,400 in 1940. When the throng of newcomers to Puget Sound encountered racism, they mobilized. James and Lillian Walker were indefatigable NAACP members. The Bremerton branch of the NAACP played a leading role in a statewide struggle that took another 25 years to achieve lasting victories.

From dime stores and bus stations, soda fountains and barber shops during the war years, the state’s civil rights pioneers moved to the halls of the state Capitol to press their case for equal rights. Forging coalitions with progressive unions, ministerial associations and service clubs, they formed “Civic Unity” and “Civic Society” committees.

James Walker was the second president of the Bremerton branch of the NAACP, and Lillian was the secretary. She well remembers addressing 500 postcards every month and going door to door to recruit new members and urge people to register to vote.

Lillian went on to become state secretary of the NAACP and one of Kitsap County’s most stalwart Democrats. The Walkers were both active in the push for a Fair Employment Practices Act, which was enacted by the Legislature in 1949.

By the end of the war, most of the whites-only signs in Bremerton had come down. However, an undercurrent of racism remained. In 1954, a Bremerton drug store refused to let James Walker buy a cup of coffee at his soda fountain. “I didn’t serve niggers in Texas,” he declared, “and I’ll go to hell before I serve them here.”

To hell you say? The Bremerton branch of the NAACP was pleased to oblige. There was a grade school about a block away from the drug store, “and the little colored kids if they went down and got an ice cream cone they had to go outside, no matter what the weather was,” Mrs. Walker says. “But the little white kids could sit at the counter. This is wrong!”

Philip Burton, a revered Seattle civil rights attorney, immediately filed a Kitsap County Superior Court complaint asserting that James Walker’s civil rights had been violated. The druggist settled out of court with the Walkers and grudgingly agreed to cease discrimination.

Lillian Walker, who seems to be everywhere at once, is “deeply humbled” by all the awards she has received lately, quipping that she has just “out-lived” most everyone else in the running. The PTA gave her its Golden Acorn. The YWCA gave her its Founder’s Award and the Democrats presented her their Lifetime Achievement award. The NAACP calls her “a living treasure.” The Kitsap County Bar Association gave her its Liberty Bell Award and the National Association of Colored Women’s Clubs announced that she will receive The Mary Church Terrell Lifetime Achievement Award. She’s running out of wall space for all those plaques.

Dianne Robinson, a Bremerton City Council member who founded the Black Historical Society of Kitsap County, often visits schools, trying to impress on young folks, especially minorities, that people like Mrs. Walker and Rosa Parks put their very lives on the line to secure equal rights. “I worry every day about where the next Lillian Walker … is going to come from. Mrs. Walker always says, ‘Who’s gonna take over for us?’ ”

Mrs. Walker’s advice to the kids she meets, including her six grandchildren and three great-grandchildren, is this: “Don’t complain. If you’ve got something to complain about, well, work at it and make it better.  … And, treat everybody right.  I don’t care who or what they are, treat them right.  You don’t have the authority to mistreat anybody, because that’s why we are here – to help each other.  If you can help somebody, help them.”

And, as the NAACP marks its 100th anniversary, what does she say to minority kids who often seem to take for granted the freedoms she fought for? “I’d try to tell them, ‘Know your history! We have fought for you to have the rights to go in and sit down and eat, to go and apply for a job. … Make a difference.’ ”