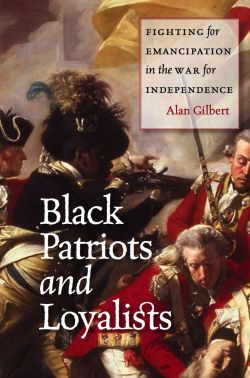 Alan Gilbert, University of Denver political scientist and anti-racist activist, is the author of Black Patriots and Loyalists: Fighting for Emancipation in the War for Independence, one of the few works that examines the free and enslaved blacks who joined the American Patriots and the British during the American Revolution and the anti-racist whites who supported them.  In the account below he describes the book and why he wrote it.

Sixteen years ago, when I was doing research on the Constitution in the context of the Shays’ rebellion and the Alien and Sedition Acts, I thought I should look into racism toward slaves.  I imagined I knew the story: the Revolution pitted the colonial slave-holders against the Imperial slave-traders.  There would be a few black revolts, but not much else to sympathize with.  I looked, however, at Gary Nash’s Race and Revolution and in the third chapter, found that a “gigantic number of blacks,” one which we will never know, he said, escaped from bondage and fought for the British in exchange for freedom.  In the next page and a half, he gave five reasons why gradual emancipation should have occurred throughout the United States during or immediately after the Revolution, said it hadn’t because the North wasn’t any good (those states were still in process of getting rid of slavery themselves) and abandoned the topic.

But I was stopped by this question.  If anything like this level of black escape were true, I thought, it would change everything we think about the American Revolution.  For I had been taught by Barrington Moore, the renowned Harvard political sociologist, that the American uprising was merely a political revolution, a shift in the personnel in power, but not a social revolution like the French.  The real American revolution, Moore thought, was the Civil War which abolished slavery.  As I had now suddenly seen, however, the deeper revolution of the 1770s, one fought largely by blacks but also anti-racist whites, was one for the freedom of all.

After many years and visits to 15 research libraries, I have unearthed what has surprisingly been buried on both sides of the Atlantic and brought this story of the deeper revolution for abolition, accompanying the American Revolution and internationally, to light.  This second revolution sometimes paralleled the revolution for independence and was sometimes, as in black Loyalists fighting for emancipation with the Crown, at odds with it.

Black Patriots and Loyalists tells the story of many individuals who, against all odds, did not despair and began to move the mountain of opposition to emancipation.  There is the Quaker, John Woolman, who walked around the South in the late 1740s, meeting with other Quakers to talk about the harms of bondage to the slave but also of how slavery wounded the conscience and perverted the person of the slaveowner.  Because of his work, by 1759, Quaker meetings barred slave masters from professing the faith.  This understanding eventually permeated other Christian denominations.  In 1774, for example, the Baptist Elhanan Winchester spoke of the practice of bondage as “a sin of crimson dye.”

There is J. Philmore, the English pamphleteer who spoke with black and white sailors in London in the 1750s and learned about slave uprisings in the Caribbean.  These sailors saw impressment in the Royal Navy as a form of bondage and thus viewed themselves as abolitionists.  In 1760, Philmore wrote Two Dialogues on the Man-Trade, a work which influenced the great American revolutionary James Otis.  In his 1764 Rights of the British Colonists Asserted and Proved, Otis wrote of “the natural liberty of every man, black as well as white.”

In taverns in the 1760s, radical artisans and sailors, black as well as white in the Northern colonies, discussed these issues.  After 1770 they composed every revolutionary crowd from the Boston Tea Party on.

As early as 1772, when tension was building between the Crown and the American colonists, British Royal Governor Lord Dunmore of Virginia threatened to raze the mansions and emancipate all the slaves and indentured servants of all who challenged royal authority.  By November, 1775, when Dunmore issued a proclamation to this effect, blacks throughout the South had come to sympathize with and escape to British occupied territory.  They were, by his single act, “Torified.”  Dunmore is thus an inadvertent hero of emancipation.  Correspondingly, Southern states like Virginia and South Carolina rebelled from the Crown to preserve bondage.  White-led secession in the South, that is, the Southern colonies being persuaded by this bold act to support the revolutionary cause, prefigured the similar act that led to the American Civil War.

Clearly the Revolution brought freedom to tens of thousands of African Americans, although often in unanticipated and contradictory ways.  A black prince from Africa was kidnapped in the 1740s, sold into slavery in North Carolina, renamed Thomas Peters, and branded.  But Peters escaped and joined the British Black Pioneers, a royal military unit.  Having fought with the British throughout the Revolutionary War, he, along with thousands of Crown supporters, were repatriated to Nova Scotia after the conflict ended.  Peters was one of five or six thousand more free black émigrés who left for Canada.  But when Peters and other Crown supporters were not allocated the promised plots of land by British officials in Nova Scotia, he led a protest movement, first in Canada for land, and then he and others eventually emigrated to Sierra Leone, the newly founded colony on the west coast of Africa, which would be the new home of former slaves from throughout the British Empire.

John Laurens, the son of a South Carolina slave-owner and second President of the Continental Congress Henry Laurens, studied in Geneva, Switzerland prior to the American Revolution, where he became acquainted with the abolitionist views of Rousseau.  He returned to fight in the American Revolution.  He served as aide-de-camp to Washington and promoted emancipation.  His proposal to liberate 3,000 to 5,000 blacks in South Carolina and Georgia in exchange for fighting, passed the Continental Congress in 1779, which was the zenith of official support for emancipation.  But despite Congressional authorization, the South Carolina legislature refused to embrace the act and it subsequently was never approved by other Southern assemblies.

Yet there are numerous examples of black participation on both sides of the American struggle for independence.  In 1781, a German private named Georg Daniel Flohr, who fought with the French Royal Deux-Ponts on the American side at Yorktown, left one such account.  Walking around the field of battle afterwards, he recorded in his diary that the majority of bodies on both sides “were Mohren [Moors].”

The crucial fighters on the American side in Rhode Island were blacks and Narragansett Indians in the 1st Rhode Island regiment.  The unit was created in 1778 due to the shortage of white Patriots, many of whom had enlisted for only ten months and then left the service when their term ended.  In contrast, members of the 1st Rhode Island Regiment fought in major battles throughout the war and served, on average, three years.  One out of every five died in battle.

Partly because of the heroic record of the 1st Rhode Island and the remarkable service of hundreds of other black soldiers in state militias from New Hampshire to Pennsylvania, gradual emancipation began throughout the Northern states.  The mountain was partially moved.

This story of the blacks who fought for their freedom during the American Revolution is not simply part of our past.  Instead it speaks to us today.  It reveals both the surprising depths of American racism, and the need and hope, as much today as then, to fight it.  Sometimes, the mountain still looks unmovable.  It is not.

I have long been an anti-racist activist.  At Walden School in New York, from first to fourth grade, I was friends with Andy Goodman.  In 1961, as a freshman at Harvard, I went on a Freedom Ride to Chestertown, Maryland.  The picketers outside Woolworth’s the previous week, we were told on the bus going down, had been attacked by a mob led by the police chief.  A women had been thrown through the glass window of the store.  And that was not Mississippi.  I did not go on Freedom Summer in 1964, but Andy did.  There, his journey in support of freedom and equality ended.  On his first day in Philadelphia, Mississippi, he was murdered, along with Michael Schwerner and James Cheney.  I dedicated Black Patriots and Loyalists to them.

Gilbert, A. (2012, June 19). Fighting for Freedom on Both Sides of the American Revolution. BlackPast.org. https://www.blackpast.org/african-american-history/fighting-freedom-both-sides-american-revolution/

Black Patriots and Loyalists: Fighting for Emancipation in the War for Independence (Chicago: University of Chicago Press, 2012).