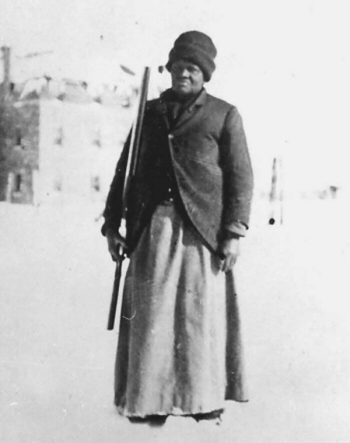 Born enslaved in Tennessee, this girl came west with Ursuline nuns after being freed. Not known for her quiet temperament, she left the convent in her teens and became, in time, a restaurant owner in several towns in Montana, Wyoming and Alberta and Saskatachewan, Canada, a cigar-smoking madame, the second woman to drive a U.S. Mail coach (earning the appellation Shotgun Mary), a notorious brawler, and one of the most notorious women of her time. The muscular, six-foot tall woman drew attention wherever she ventured as she constantly re-invented herself as an entrepreneur and a once-seen-never-to-be forgotten individual.

Little is known of Fields’s life aside from the businesses she established and her reputation as a woman who would “do whatever it took” to succeed in the cold barrens of the northern high country. Retiring to a placid life of gardening in Cascade, Montana, she was befriended by Gary Cooper, the actor who, as a child, grew up with her as a neighbor. Cooper spoke and wrote fondly of her. Given the limitations society placed upon her by virtue of skin color and sex, she stands out as both a unique individual and a woman who was far ahead of her times in setting new standards for strong women in tough times.