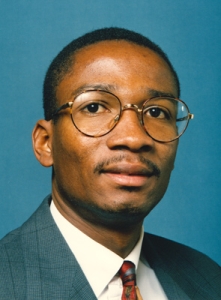 Cleo Fields, politician, lawyer, and United States Representative from Louisiana’s Fourth Congressional District (1993-97), was born in Baton Rouge, Louisiana on November 22, 1962.  At four years old, Fields lost his father, Isidore Fields, a dockworker, in a car crash. His mother, Alice Fields, supported her ten children by working as a maid and taking in laundry.  Fields started working at a young age to help his family and save for college.

In 1980, Fields graduated from McKinley High School.  He attended Southern University, where he majored in mass communications and then enrolled in its College of Law.  In his final year of law school, he ran for the Louisiana State Senate. At twenty-four years old, Fields became the youngest elected state senator in Louisiana’s history. Fields championed environmental issues, job creation for minorities, and the elimination of illegal drugs.

During his two terms, Fields served as parliamentarian as well as on the Small Business, Banking, Finance, and Urban Affairs Committees.  His main legislative goals included job creation, affordable health care, and decreasing the deficit.

Throughout his terms, lawsuits challenged the Fourth District’s new borders, which Fields helped create during his time in the state senate.  The plaintiffs claimed that the borders violated their voting rights.  Court decisions forced the state to redraw the district’s borders five times. Fields appealed to the Supreme Court and state legislature about the fifth border change, which resulted from a 1996 United States District Court decision. However, his petitions did not prevent the state legislature from agreeing to new borders, which excluded Fields’s home from the district.  As a result, Fields chose not to run for re-election.

Fields launched a failed campaign for governor of Louisiana in 1995.  He also acted as a senior advisor to President Bill Clinton’s re-election campaign.  In 1997, he returned to the state senate where he founded the Louisiana Leadership Institute, which serves urban youth.  Fields began practicing law in 1998 and he started his own radio show, “Cleo Live,” in 2000.

Fields is married to Debra Horton with whom he has two children, Cleo Brandon and Christopher.  He continues to be an active voice in Louisiana politics.