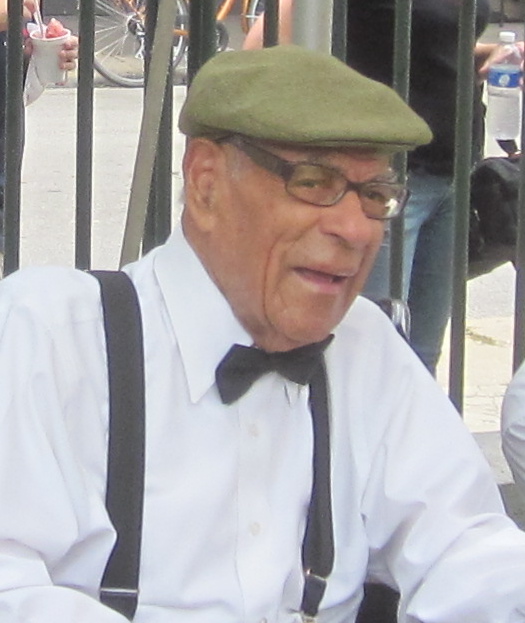 New Orleans, Louisiana trumpeter Lionel Charles Ferbos was born in in the city’s Creole 7th Ward on July 17, 1911.  His father was Louis Ferbos, a tinsmith, and his mother was Rosita Ferbos. Lionel had two siblings.  As a child, he had asthma and was advised not to play any wind instrument.  However, in 1926 he saw Russian orchestra leader Phil Spitalny’s all-girl orchestra and decided to become a musician. Ferbos studied with Professor Paul Chaligny, who taught him to read music, and he subsequently continued to study with trumpeter Albert Snaer.  Ferbos was enumerated as a musician in the 1930 census, and like most musicians of that time, he always kept a manual job.  At Haspel’s Clothing Factory, he met seamstress Marguerite Gilyot, who became his wife in 1934.  They had two children, actor Lionel Jr, (1939–2006) and Sylvia Schexnayder (b. 1941).  He later joined his father’s business and became a master tinsmith.  His work was once featured at the New Orleans Museum of Art.

During the Great Depression, Ferbos played first trumpet in the Works Progress Administration (WPA) jazz band.  He also played in several society jazz bands, performing at well-known New Orleans venues like the Pythian Roof Garden and Pelican Club. In the 1940s, he played on Lake Pontchartrain, and in the 1950s, he worked with Harold Dejan.  In the 1960s, he played with Herbert Leary’s society dance orchestra.  By 1970, he was with Lars Edegran’s New Orleans Ragtime Orchestra, touring internationally.  Ferbos appeared in the film Pretty Baby. In 1979, he appeared in the musical One Mo’ Time but chose to stay in New Orleans when the show moved to New York.  Despite his ever-faltering health (doctors once said he would not live to 60), Ferbos continued to perform.  He celebrated his 102nd birthday by playing at the French Quarter club where he performed weekly beginning in 1991. Traditionally, Creole New Orleans musicians were musically well-educated, and Ferbos belonged to this group of excellent musicians who played sheet music. While there was some improvising, altering phrasing and adding notes, Ferbos preferred his music, including solos, to be written out. He was never a “hot,” improvisational jazz musician.  Ferbos was not a star trumpeter, preferring instead to be an ensemble player. His first recording was with the New Orleans Ragtime Orchestra in 1971; he also performed on the Pretty Baby soundtrack.