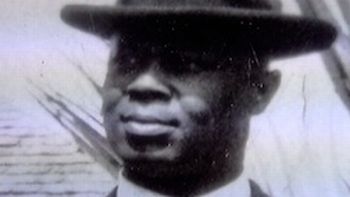 James Farmer Sr., prominent early 20th Century educator, initially gained attention as the first African American to hold a Ph.D. in the state of Texas.  Farmer was born on June 12, 1886 in Kingstree, South Carolina to Carolina and Lorena Farmer, who were former slaves. As a child, Farmer was a proficient scholar, receiving all A’s up until he reached the eighth grade when he attended McLeod Institute in South Carolina.  Despite such promise his education ended because there was no high school available in his community for African Americans.  Farmer’s record, however, came to the attention of local community leaders who raised more than four hundred dollars to send him North to continue his education.  With no guarantee of admission, Farmer nonetheless set his sights on Boston University.  He traveled there by foot in 1909.

While working various jobs in the Boston area including as a valet and a carriage boy, he eventually gained admission to Boston University and received a degree seven years later in 1916 in Sacred Theology. He earned his doctorate at the same university in the same field one year later.  Farmer was thirty years old at that time. In 1917 he married Pearl Marion Houston, a woman he met at the McLeod Institute, who had been teaching in Jacksonville while Farmer was in Boston.  The new couple relocated to Texas in 1917, where Farmer began preaching in black churches.  During this time they had their first two children, Helen-Louis and James Farmer Jr.

Farmer began his teaching career at Wiley College in 1919 and taught various subjects, including literature, Hebrew, philosophy, and Greek.  In 1920 Farmer and his family relocated to Rust College in Mississippi, where he was simultaneously a professor, Dean of Students and campus minister.  He also worked at Houston Tillotson College in Austin, Texas between 1925 and 1930, serving in the registrar’s office while teaching religion and philosophy. From 1930 to 1933 Farmer taught at Gammon Theological Seminary in Atlanta, Georgia.  He then returned to Wiley to teach psychology, philosophy, and religion.  In 1939, Farmer moved to Washington, D.C. to accept the position of Dean of the School of Religion at Howard University.  He retired from that post in 1956.

On May 14, 1961, James Farmer Sr. passed away from complications related to cancer and diabetes at the age of 74 in Washington D.C. His passing brought his son, James Farmer Jr., home and may have saved the younger Farmer’s life.   James Farmer Jr, a leading civil rights activist and chair of the Congress of Racial Equality (CORE), was scheduled to take a Trailways bus as part of the Freedom Rides, CORE’s effort to protest racial segregation in bus terminals across the South.  This particular bus was attacked by segregationists in Birmingham, Alabama and many of its passengers were seriously injured.  James Farmer Jr., credits his father’s funeral with saving him from that attack.  Although largely overlooked because of his more prominent son, James Farmer Sr.’s passion for learning opened the doors to hundreds of African American college students across the South.