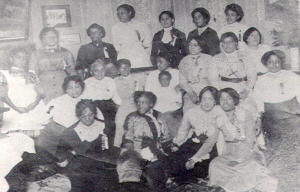 The Club was originally founded to provide hospitality and housing services to African American visitors who were not welcomed in the segregated hotels and other commercial establishments that proliferated in the Bay Area and around the state.   The club expanded its services to a variety of community activities including tutorial assistance for African American students and producing literary and musical programs showcasing the talents of African Americans.  Roland Hayes, the internationally acclaimed tenor, was a frequent performer at Beth Eden Baptist Church and other Bay Area churches in musical recitals sponsored by the Fannie Jackson Coppin Club.

In a 1912 issue of The Crisis, W.E.B. DuBois wrote that although black women’s clubs in the West seemed “far removed from the center of club activity,” Western African American clubwomen were firmly in the mainstream and their work represented a “divine fire” of collective activism.  The Fannie Jackson Coppin Club was part of the ongoing African American struggle to address an array of social and economic community needs and to challenge the barriers of segregation and sexism.   The Fannie Jackson Coppin Club is still in existence, continuing a long-established tradition of black female voluntary community service and providing new generations of African American women with an institutional base for nurturing leadership and activism.