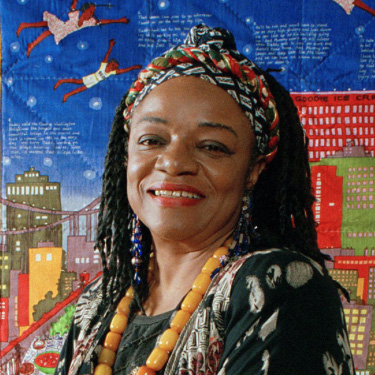 Visual artist, storyteller and feminist activist, Faith Ringgold was born on October 8, 1930 in Harlem Hospital, New York City to Andrew Louis Jones, Sr. and Willie Edell Jones (Willi Posey), a fashion designer and dressmaker.  An arts graduate from City College in New York City, Ringgold was Professor of Art at the University of San Diego until retirement in 2003. She divided her residence between New York and New Jersey home/studios and Southern California.  Her international reputation reflects a broad art world appreciation initiated primarily through extensive traveling shows and appearances on university campuses.  Faith Ringgold’s versatile expression includes paintings, Tibetan-style tankas, performance art, masks, freestanding sculptures and painted quilts.  All are represented in museums nationwide and international collections.  Her publications, primarily storybooks for children, complete this impressive catalogue.  Tar Beach, which won the Caldecott Award for 1992, is acknowledged by many as a children’s classic.

Ringgold’s writing and visual art creations are motivated by her interest in themes of African identity and history, including struggle, social transformation, freedom, and overcoming adversity. For instance, Tar Beach and Aunt Harriet’s Underground Railroad in the Sky (1992) denote freedom through their flying characters.  Also, although some of her images might sometimes be bloody, for example, “The Flag is Bleeding,” her other work promotes peaceful change and transformation.  Such works include My Dream of Martin Luther King (1998) and If a Bus Could Talk (1999). The latter is a depiction of Rosa Parks’ life during a period when the Ku Klux Klan and the nightriders terrified African Americans.  Parks’ story is paralleled by the Martin Luther King, Jr.’s story that embraces a peaceful fight for civil rights.  While the same concept of courage, freedom and peace resonate in The Invisible Princes and Dancing at the Louvre, Faith Ringgold’s French Collection and Other Quilt Stories, presents a selected overview in paintings and texts of her famed story quilts.  Illustrations of Ringgold’s works, which date from the 1980s and 1990s enliven the text appropriate for young to older adults.

Faith Ringgold has received more than 75 awards, fellowships and citations as well as 17 honorary doctorates and honors (including the prestigious Solomon R. Guggenheim Fellowship) and two National Endowment for the Arts awards.