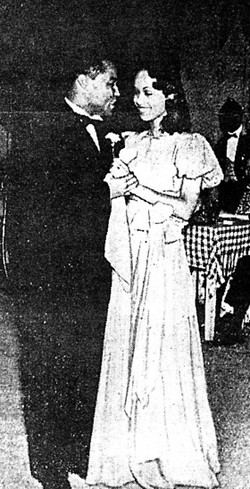 Although never given accolades parallel to her contemporaries in mainstream films, Francine Everett’s unyielding determination to epitomize African American women in a quintessential fashion defines her importance in black film nostalgia. Born in 1915 in Louisburg, North Carolina, her family moved to New York during the Harlem Renaissance. Francine attended New York City’s St. Marks School, but traded her education for a career as a chorus girl in New York’s popular entertainment venues, including the Savoy Ballroom and Small’s Paradise.

At the age of 15, Francine married Booker Everett, but became a widow at the age of 17. She then went to work for Harlem’s Federal Theater Project where she met her second husband, actor Rex Ingram. In 1936, the couple married and moved to Hollywood and soon afterwards were offered roles in the all-black cast film The Green Pastures. Everett declined the offer, sighting Hollywood’s-then racially discriminatory climate, while Ingram accepted a triple-lead role in the film and subsequently became one of the industry’s most reputable actors.

In 1939 after the couple divorced, Everett made her film debut opposite boxing champion Henry Armstrong in Keep Punching. By the mid-1940s, Everett was appearing as the leading lady in a number of "race" movies, including Big Timers and Tall, Tan, and Terrific. In 1946 she starred in Dirty Gertie from Harlem USA. Race films—made by independent African American filmmakers—avoided the negative stereotypes of mainstream films, reflected African Americans in a more balanced light and were marketed to black audiences in the South and the major cities of the Northeast and Midwest.

Everett supplemented her acting career by modeling and singing. As a vocalist, she appeared in more than 50 short musicals featuring some of the most renowned artists of the time including Jackie “Moms” Mabley, Count Basie, and Cab Calloway.

With the demise of race films in the late 1940s, Everett obtained only two minor roles in Hollywood films, both with race-relations themes—Lost Boundaries (1949) and No Way Out (1950).  Afterward, Everett faded from the spotlight and worked in a clerical position at Harlem Hospital. Shortly after she retired in 1985, the resurgence of race films sparked interest in the films’ pioneer actors.

Everett often participated in symposiums and conducted seminars on race films. She continued involvement in minority acting, serving as a member of the Negro Actors Guild. Francine Everett died in a nursing home in 1999, at the age of 84 in Bronx, New York. Today her film Dirty Gertie has been rediscovered and is widely examined among film historians and scholars of African American film.