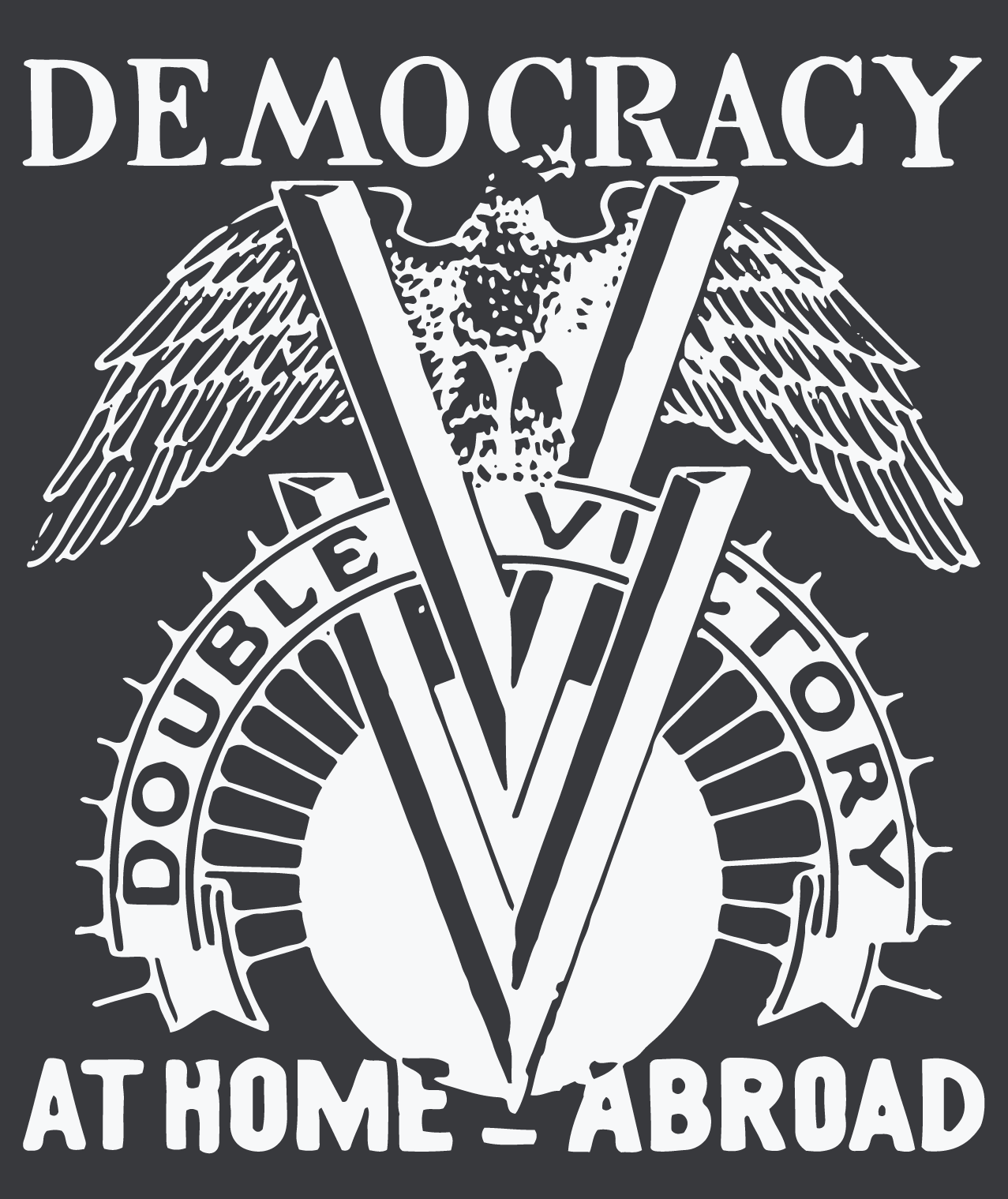 The Double V campaign was a slogan championed by The Pittsburgh Courier, then the largest black newspaper in the United States, that promoted efforts toward democracy for civilian defense workers and for African Americans in the military.

The Pittsburgh Courier newspaper, founded in 1907, had long used its voice to champion the rights of African Americans. When World War II began on September 1, 1939, the newspaper immediately made a connection between the United States’ treatment of African Americans and Nazi Germany’s treatment of Jewish people. President Franklin D. Roosevelt wrote the newspaper’s editor, Robert Vann, requesting that the paper tone down its rhetoric concerning racial discrimination. The newspaper complied for a while, but on January 31, 1942, just weeks after the U.S. declared war on Japan and Germany after the attack on Pearl Harbor, the Courier published a letter from twenty-six-year-old James G. Thompson, a defense worker in Wichita, Kansas. Like most black war workers at the time, Thompson could not work on the factory floor of the aircraft manufacturing company where he was employed. He was confined to working in the factory cafeteria.

Thompson’s letter, “Should I Sacrifice to live ‘Half American’?” challenged the lofty rhetoric of American war aims, contrasting them to the actual treatment of African Americans, then one-tenth of the population. At the end of his letter, Thompson reminded his readers that the “V for Victory” sign was being displayed prominently across the U.S. and among its allies, calling for victory over tyranny, slavery, and aggression as represented by the aims of the Axis Powers: Germany, Italy, and Japan.

Thompson called for a “double V for victory” sign, with the first V standing for victory of enemies from without and the second V for victory over enemies within, meaning those in the United States who limited the freedoms of African Americans.

The Courier picked up the theme and on February 7, published on its front page a “Double V” insignia, announcing the “Democracy at Home-Abroad” slogan to test its popularity with their readers. The initial response was overwhelming. The Courier ran a survey on October 24, 1942 to measure the impact of the campaign and 88 percent of its readers responded in support. Black soldiers and sailors in particular embraced the idea, and some even carved the Double V on their chests.

While clearly the “Double V” Campaign was a hugely successful marketing effort for the Courier, it was much more than that. African Americans from almost every background embraced the idea that with the sacrifices of over one million black men and women in various branches of the military during World War II and six million more working in defense plants, they would not allow Jim Crow to remain unchallenged either during or after the war. Many historians see the Double V campaign as the opening salvo in the Civil Rights Movement and continued protests for racial justice.