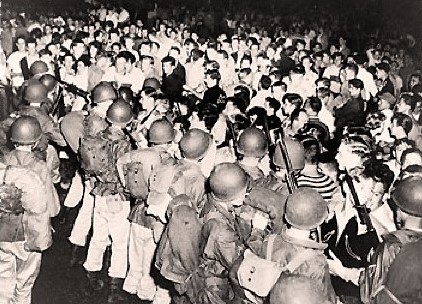 The Cicero Riot of 1951 occurred from July 11-12, 1951, when a mob of approximately 4,000 whites attacked an apartment building an African American family had recently moved into in Cicero, Illinois, a Chicago suburb. The events leading up to the riot began in June 1951 when Mrs. Camille DeRose, owner of the building at 6139-43 W. 19th Street in Cicero, rented an apartment to Henry E. Clark Jr, an African American World War II veteran and graduate of Fisk University, his wife, Johnetta Clark, and their two children in an all-white neighborhood.

After learning of Mrs. DeRose’s decision, high-ranking Cicero official warned her it would be trouble for the Clarks if the Black family moved into the apartment. On June 8, 1951, around 2:30 pm, a moving van containing $2,000 worth of Clark family’s furniture was stopped by Cicero police who told him to leave the town or get arrested for protective custody. Twenty police officers then grabbed Clark. He was hit eight times as he was pushed towards a car parked across the street and then shoved inside the car. The police warned him to get out of Cicero or he would be killed.

On June 26, 1951, the National Association for the Advancement of Colored People (NAACP) filed a suit against the Cicero Police Department and shortly afterward the Clark family moved in. On July 11, 1951, a crowd of 4,000 whites attacked the apartment building where the Clark family had been staying for just two weeks. Although 60 police officers were assigned to the scene to control the rioting, women threw stones at Clark’s windows, and another group of white men tossed firebombs into the windows and the rooftop of the building. Other mob members reached the Clark apartment and set it on fire. Some of the whites who participated in the riot were teenagers. When the firemen arrived at the apartment building, they were met with bricks and stones thrown by the mob. Cook County Sheriffs’ deputies asked the firemen to turn their hoses on the rioters but they refused to do so without an order from their lieutenant who was unavailable at the time.

When it was obvious that Sheriff’s deputies could not control the riot, County Sheriff John E. Babbs asked Illinois Governor Adlai Stevenson to send in the Illinois National Guard. As the Guard arrived at the scene, rioters fought with them. Armed with bayoneted rifles and using tear gas, Guardsmen ended the riot by setting a 300-meter (328-yard) perimeter around the apartment block. Most of the violence and rioting ended by the morning of July 12. Through the ordeal Clark and his family were not injured.

Although over $20,000 in damage had been done to the building, the Cook County grand jury failed to indict any of the accused rioters. Instead, they indicted Clark’s NAACP attorney, Mrs. DeRose, the owner of the apartment building, her rental agent, and her attorney on charges of inciting a riot and conspiracy to damage property. Those charges were later dropped. A federal grand jury then indicted four Cicero officials and three police officers for violating Clark’s rights due to the riot. The Cicero police chief and two officers were also fined a total of $2,500 for violating Clark’s civil rights. The Cicero race riot was the first to be viewed on television.