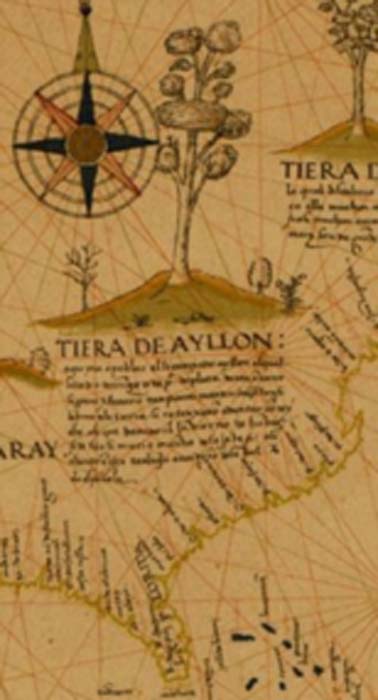 San Miguel de Gualdape is a former Spanish colony founded in 1526 by Lucas Vazquez de Ayllon. It was the third settlement in North America north of Mexico. In the early 1500s, Spaniards were conducting expeditions to the area now known as South Carolina and Georgia to kidnap Native Americans as slaves. In 1521, wealthy planter, lawyer and magistrate Lucas Vazquez de Ayllon dispatched an expedition led by Francisco Gordillo to the Bahamas to capture natives, and Gordillo returned with seventy Indians. Ayllon took a recently baptized Indian with him to Spain to speak with the court chronicler about his homeland and people, as well as tales of valuable gems found in the region. After meeting with the King, Ayllon received a royal patent, giving him permission from King Charles V and the Royal and Supreme Council of Indies to establish a settlement on the eastern seaboard in 1523.

In April of 1525, Ayllon hired Pedro de Quejo who set sail with two boats and sixty men to explore the new region. When Quejo returned successfully, Ayllon began to assemble a crew and selected passengers for the impending new settlement. The fleet consisted of six ships, approximately 600-700 people, supplies and livestock that included pigs, cows, sheep and one hundred horses. Among the passengers were approximately 100 enslaved Africans from previous expeditions and trade. On August 9, 1526, the fleet lost its flagship when it struck a sandbar and sank off the coast of South Carolina. The court interpreter and other Indians brought along as guides deserted the fleet and escaped into the woods. After building a replacement ship, Ayllon and his fleet moved 200 miles south, and upon landing, immediately began building houses and a church. On September 29, 1526, the settlement was christened San Miguel de Gualdape (sometimes called San Miguel de Guadalupe), a reference to the local Guale tribe.

The settlers quickly suffered from dysentery, hunger, cold, and Indian attack. On October 18, Ayllon died, and leadership of the settlement was assumed by Captain Francisco Gomez, who wanted to stay at the settlement and wait for fresh supplies to arrive. Another faction, led by Gines Doncel and his lieutenant Pedro de Bazan, wanted to leave the settlement and return home. Doncel and a group of supporters seized and arrested Gomez and others supporting him, and locked them in Doncel’s home. When Doncel and Bazan set out to ambush other opponents, the enslaved Africans set fire to Doncel’s home, and freed Gomez and the other captives. The enslaved Africans escaped to live with the local Native Americans. This incident is regarded as the first slave rebellion in mainland North America. By July 1527, only one hundred and fifty of the original settlers had survived and returned home to Hispaniola.