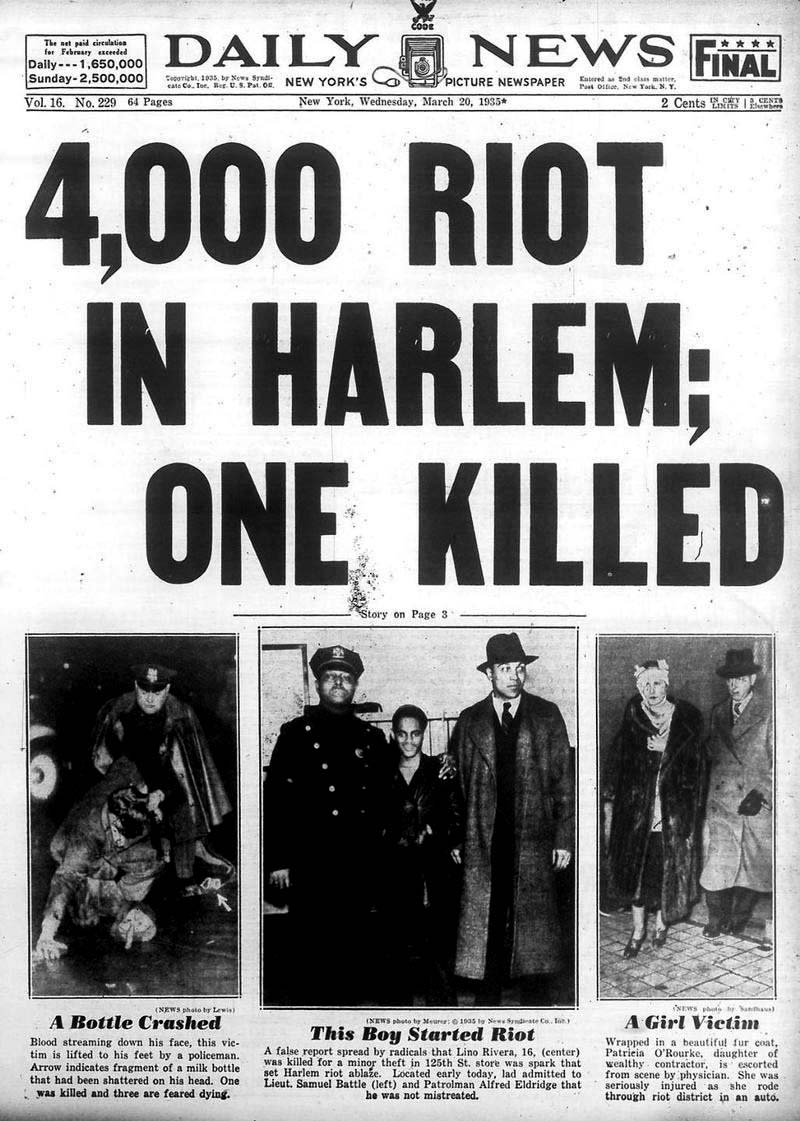 The Harlem Riot of 1935, the first in New York City in the 20th Century, was the consequence of a lingering unemployment crisis and police brutality.  At 2:30 p.m. on March 19, 1935, a 16-year-old black Puerto Rican boy named Lino Rivera stole a 10 cent penknife from the Kress Five and Ten store on 125th Street.  Both the store owner and the assistant manager saw Rivera steal the knife and managed to capture him before he was able to run away.  A mounted police officer was called to the scene to investigate.  When asked if he wanted to press charges, the store owner instructed the officer to let Rivera go.

In order to avoid anxious crowds and excited spectators, the officer took Rivera down through the back entrance of the store and out onto 124th Street.  When one of the spectators saw the police officer take Rivera away, she shouted that they were going into the basement to beat Rivera.  An ambulance arrived moments later to take care of the store owner and the assistant manager, who suffered scratches and other wounds while trying to tackle Rivera.  When the ambulance left the scene empty, many of the spectators assumed that Rivera had been killed.

Shortly after the ambulance left, a hearse parked across the street from the store at 124th Street.  The driver was visiting his brother-in-law, who was inside of the store.  Gathering crowds immediately assumed that the hearse was there to haul away the body of Rivera.  The police who arrived on the scene attempted to inform the growing crowds that no harm had been done to Rivera.  Spectators began to demand that the police bring out Rivera alive, but police officers repelled the crowds and claimed that this was none of their business.  At 5:30 p.m. the store on 125th Street was closed and New York Mayor Fiorello La Guardia urged the residents of Harlem to remain calm.

The closing of the store did little to stop the anger of the crowd, and word spread across into Harlem that a boy had been mistreated by the police.  Groups organized by the Young Communist League and a black group called the Young Liberators mounted a demonstration that drew thousands of people.  When a white member of the Young Communist League was introduced and stood up to speak, an object was thrown through the window of the store, and the police responded by arresting the speaker and attempting to disperse the crowd.

The crowd reorganized across the street and another speaker tried to address the group from a lamp post perch.  The police arrested him as well on the charge of “Unlawful Assemblage.”  The crowds began to gather in greater numbers along 125th Street, and soon spread to other areas in Harlem.  As the sun set, the looting and window smashing began.  Police attempted to stop the crowds by circulating photographs of Rivera alive, but this fueled rumors that the photographs were fake.

The rioting ended the next day when New York Governor Herbert Lehman announced to Harlem’s white shop owners that city officials had the situation under control.  Overall, three African Americans were killed and nearly sixty were injured.  Seventy five people, mostly blacks, were arrested by the police. The riot caused over $200 million in property damage.