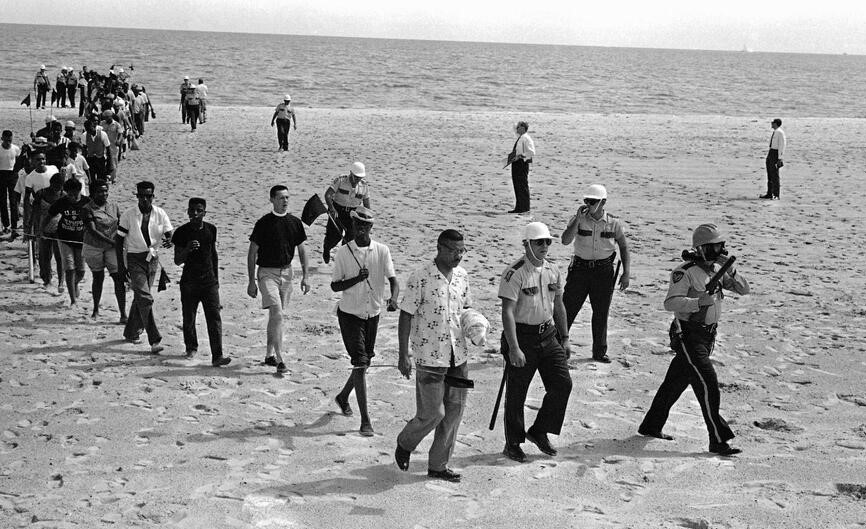 The first wade-in occurred on May 14, 1959, after Mason attempted to swim at a local beach with friends and their children. A city policeman ordered them to leave because they were violating Mississippi segregation laws. Mason and one of his friends, Murry J. Saucier, Jr, then went to the police station to confirm if law had been broken. When they received no answer, they returned the next day where they met with Biloxi Mayor Laz Quave who told them they would be arrested if they returned to the beach.

In June 1959, another Mason friend, Dr. Felix H. Dunn, wrote to the Harrison County Board of Supervisors, asking, “What laws, if any, prohibit the use of the beach facilities by Negro citizens?” The Board president responded that property owners along the beach owned both “the beach and water from the shoreline extending out 1,500 feet meaning that black swimmers were trespassing if they came onto the beach.

In October 1959, Mason, Dunn, and two other black residents petitioned the board to allow African Americans to use the beach. A supervisor asked if they would be satisfied if they could use a segregated portion of the beach. Mason said no.

On April 17, 1960, Mason returned to the beach and was arrested. As word got out of his arrest, Black Biloxi residents pledged to join him in subsequent protests. On April 24, 1960, which became known as the Bloody Wade-In Day, Mason led a second, larger protest of 125 black men, women, and children who had gathered on the beach. Violence broke out as white segregationists counter protestors pelted the demonstrators with rocks and fired shots over their heads. Fighting also occurred between individual Black protestors and white segregationists. Eight black men and two white men suffered gunshot wounds, and numerous people were injured from fights. The Biloxi police took no action to prevent the violence against the Black protestors but Mason was arrested, tried, and convicted of disturbing the peace for his role in the demonstration.

On May 17, 1960, the U.S. Justice Department sued the city of Biloxi for denying African Americans access to the beaches. When city officials ignored the lawsuit, Biloxi civil rights leaders staged another protest which allowed them to file suit in the Harrison County courts and potentially gain an earlier resolution.

Sporadic wade-ins, as they were now called, continued along Biloxi beaches until the final protest on June 23, 1963, two weeks after Medgar Evers’s assassination in Jackson, Mississippi., Protestors placed black flags in the sand in memory of Evers. Dozens of African Americans were assaulted during the protest and police arrested 71 mostly Black protestors. More than 2,000 white counter protestors attacked the black demonstrators and vandalized and overturned cars until the police restrained them.

Although the 1964 Civil Rights Act officially desegregated Biloxi beaches, only in 1968 were the Biloxi beaches finally opened to all races. In 2009, on the 50th anniversary of the first wade-in, a section of U.S. Route 90 near Biloxi was renamed the Dr. Gilbert Mason Sr. Memorial Highway.