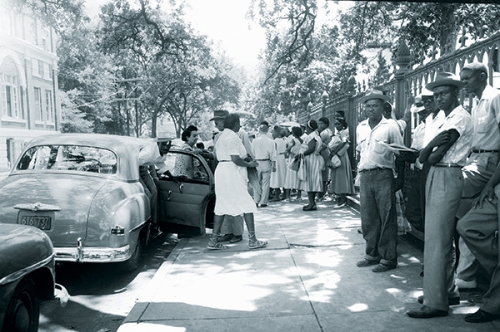 The Baton Rouge (Louisiana) Bus Boycott in 1953 was the first large-scale boycott of a southern segregated bus system. It inspired the Montgomery Bus Boycott that took place two years later. The boycott, however, remains controversial because many supporters felt its leader, Rev. T.J. Jemison, capitulated too quickly to city demands.

The boycott was prompted partly by the 1950 decision by the Baton Rouge City Council to support the financially strapped municipal bus company by revoking the licenses of nearly forty competing black-owned companies. African Americans had no choice but to ride segregated buses operated by the city-owned bus company.  Blacks made about 80 percent of the bus riders on the city bus system but were required to sit in the rear of the bus, or stand, even if the front seats reserved for whites remained empty. In January of 1953, the bus fares rose from 10 to 15 cents. Reverend T.J. Jemison, pastor of Mt. Zion First Baptist Church, the largest black church in Louisiana, made a complaint to the city council. In response, they passed Ordinance 222, which allowed blacks to sit in “white” seats if the bus was not crowded and those seats were unoccupied. Blacks, however, could not sit next to whites or in front of them.

The white bus drivers’ union opposed Ordinance 222. When two white drivers were suspended for not obeying the ordinance, the union went on strike on June 14, 1953. After four days of the strike, Ordinance 222 was overturned by Louisiana Attorney General Fred Leblanc, who claimed it violated state segregation laws, and the white bus drivers returned to work. That same day–June 18–Rev. Jemison, local businessman Raymond Scott, B.J. Stanley, head of the local National Association for the Advancement of Colored People (NAACP), and other black leaders, formed the United Defense League (UDL) to protest bus segregation. They called on black Baton Rouge residents to boycott city buses and urged them drive, take taxis, or walk to work.  After leaders announced the decision at a mass meeting held at McKinley High School, meeting participants went door to door to inform residents. WCLS, the local white-owned, but black-oriented, radio station also spread the word.

The next day, as the city buses approached blacks at regular bus stops, the boycotters turned their backs to the buses. Hundreds of black automobile owners volunteered to carry passengers to and from work. The UDL’s nightly meetings drew thousands of supporters.  On the evening of June 22, more than 7,000 black residents gathered at the city municipal stadium in support of the boycott.

Facing financial ruin, the bus company and the city met with Rev. Jemison, president of the UDL, on June 24.  Their compromise became Ordinance 251. The company reduced the number of white-only seats, but blacks were still required to sit behind whites and would have to stand even if some white seats remained empty.  Jemison claimed the compromise was the best that could be achieved, but many, including some in the UDL leadership, criticized his decision.

The Baton Rouge Bus Boycott did not end segregation on the buses, but it showed that peaceful, well-organized and supported grassroots protests could be effective in the Deep South.  The system of ride-sharing provided a model that was used by the Rev. Martin Luther King  and the Montgomery Improvement Association during the Montgomery Bus Boycott.