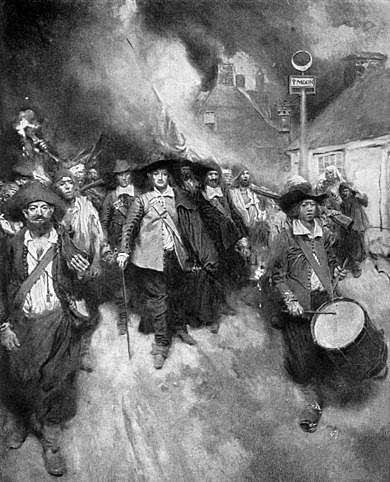 Bacon’s Rebellion in 1676 was the last major uprising of enslaved blacks and white indentured servants in Colonial Virginia. One consequence of the failed rebellion was the intensification of African slavery and the social separation of blacks and whites in Virginia.

The origins of Bacon’s Rebellion rested with the conquest of the Powhatan Indian Confederation (1644-1646) and the Confederation’s lands being distributed to the English planter class. Despite their defeat, Indians formally associated with the Confederation continued squatting on these lands which caused the Virginia colonists to engage in warfare against them.

The military and political situation was made more complication by the presence of African slaves who along with indentured servants produced the colony’s main crop, tobacco. Planters looked down upon the slaves, indentured servants, and landless freemen both White and Black whom they called the “giddy multitude.”

The two main antagonists during the rebellion, Virginia Colonial Governor William Berkeley and landowner Nathaniel Bacon who was related by marriage, were both purchasers of former Powhatan land near Jamestown. During the decades of the 1650s and 1660s a sizable number of indentured servants, Black and white, who had completed their required indentured labor service, clamored for old Powhatan land as well which was under the control of Berkeley and his planter class associates.

Despite his elite status, Bacon joined and led these former servants in attacking peaceful Indians to acquire their lands. Berkeley, however, fearing an outbreak war between whites and Indians on the frontier, jailed Bacon for a few months, because of these attacks.

Once released, Bacon declared himself the leader of the colony’s former indentured servants, freemen, black and white, newly arrived landless immigrants from England, Scotland, or Ireland, and enslaved blacks, all of whom bonded together because of their common exploitation on the large tobacco estates. Understanding that the promotion of their grievances served his own interests for power and additional land, Bacon marched on Jamestown, the colonial capital, with 500 men and confronted Governor Berkeley who escaped. Bacon then issued his “Declaration of the People” on July 30, 1676. In this document, he accused Governor Berkeley of corruption and of being pro-Native American.

The rebellion then meandered through the late summer months. On September 19, Bacon and his followers returned to Jamestown and battled forces loyal to Governor Berkeley. He forced Berkeley and his followers to retreat and then burned the town. Despite his victory, Nathaniel Bacon, died of dysentery in the Virginia bush in October 1676.

John Ingram took over leadership of the rebellion but by that point many of Bacon’s followers had deserted the cause.

British Royal Navy Captain Thomas Grantham, commander of the thirty-three-gun war ship, the Concord confronted the remaining 400 rebels: indentured servants, freemen, and slaves, at their makeshift fortification called West Point. Grantham persuaded most of the men to disarm and surrender but 80 enslaved men and 20 Englishmen resisted. Grantham promised them pardons once they left the fortification and returned with him to the Concord. Once on the vessel, his soldiers and sailors forced their capitulation. Although pockets of rebels throughout Virginia continued to resist colonial authorities into 1677, the confrontation at West Point effectively ended the Rebellion.