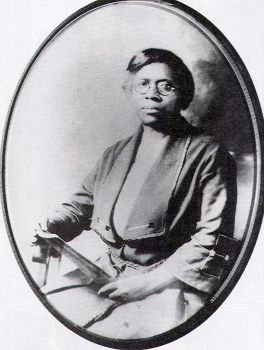 Dr. Matilda Arabelle Evans, black healthcare advocate, was born in Aiken, South Carolina in 1872.  The oldest of three, born to Anderson and Harriet Evans, she spent much of the beginning of her life working in the fields with her family.  Martha Shoefield, a white Quaker, met Evans and became impressed by the young woman’s intelligence.  Shoefield helped raise the necessary funds to allow Evans to attend Oberlin College in Oberlin, Ohio.  She left before graduating in 1892 to accept a teaching position at Haines Institute in Augusta, Georgia.  After a year she began schooling at the Woman’s Medical College in Philadelphia, again with the help of her mentor, Shoefield, who persuaded a wealthy benefactor, Alfred Jones, to fund her education. In 1897 Evans received a Medical Degree from WMC, and abandoning her goal being a medical missionary to Africa, she moved to Columbia, South Carolina and set up a practice.

Evans specialized in surgery, obstetrics, gynecology, pediatrics, and hygienics, caring for patients out of her home until she established Taylor Lane Hospital in 1901, the first black-owned hospital in Columbia.  Rare for that era, she had an interracial clientele built up due to her discretion and professionalism.  She used the funds received from wealthy white patients to give free or subsidized care to black patients, especially women and children.

Evans had a special concern for black children. Rare for the time, she believed that health care should be a citizenship right and governmental responsibility, much like education. She strongly advocated public health care and petitioned the State Board of Health of South Carolina to give her free vaccines for black children.  In 1916 Evans created the Negro Health Association of South Carolina and in 1918 she volunteered in the Medical Service Corps of the United States Army during World War I.

Matilda Evans was active in her community.  In addition to establishing Taylor Lane Hospital (which became St. Luke’s Hospital and Training School for Nurses after a fire destroyed the first hospital), she established a community health organization, a community center and a boys’ pool (Dr. Evans Park and Swimming Pool) among other benefits to Columbia’s black community.  Evans also adopted seven children and eventually fostered over two dozen more.