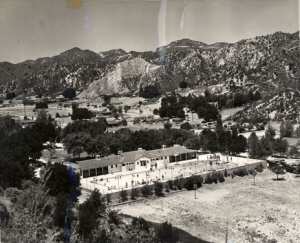 In 1924 a group of prominent Los Angeles African Americans, led by actor and real estate developer Sidney P. Dones and including Norman O. Houston, Joe and Charlotta Bass, Hattie S. Baldwin among others, bought 1,000 acres in Santa Clarita Valley forty miles north of the city to build a vacation resort for African Americans. These investors, who called their proposed community Eureka Villa, envisioned a resort area of cabins located on half-acre lots, free from the prejudices and restrictions of the city. The resort featured a community house, tennis courts, baseball fields, hiking trails and a nine-hole golf course. It was an immediate success with buyers from nearby states, and as far away as Chicago and Cleveland, buying lots and planning to build permanent residences. While Eureka Villa was never exclusively African American, they were the predominant owners of the restaurants, inns and stores in the area.

In 1939 the residents changed the name of their resort community back to Val Verde (Spanish for Green Valley), the original name of a nearby gold-rush boom-town. In June 1940 actress Hattie McDaniels presided over the opening of a $125,000 Olympic-sized pool complete with a bathhouse built with the assistance of the WPA. That same year a beauty contest was held for young women where “you don’t have to be beautiful in the usually accepted way, for the girls will be judged for Negroid type.”

Through the years jazz bands played at the community center, visitors rode horses through the surrounding hills, and thousands of picnickers and vacationers summered and wintered there. Bill “Bojangles” Robinson helped establish a church and James Earl Jones, Sr., raised horses on a ranch nearby. In 1947, 18,000 people, mostly African American, visited Val Verde for Labor Day. Soon afterwards it was nicknamed “The Black Palm Springs.” Val Verde flourished as a retreat until the Civil Rights era brought long-overdue access to Los Angeles’ housing, pools and beaches.