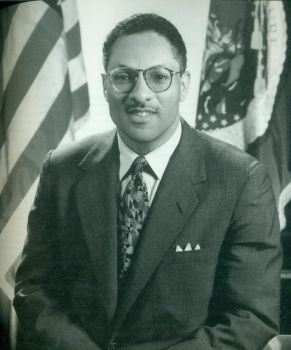 Alphonso Michael Espy in 1986 became the first black Congressman elected from Mississippi since John R. Lynch, who served during Reconstruction.  He was also the first African American to hold the post of Secretary of Agriculture.  Mike Espy was born in Yazoo City, Mississippi. He received a B.A. from Howard University in 1975 and then attended law school at the University of Santa Clara where he received his J.D. degree in 1978. Espy returned to Mississippi after law school and worked as an attorney for Central Mississippi Legal Services from 1978 to 1980.  Between 1980 and 1984 Espy served as assistant secretary of the Public Lands Division for the State of Mississippi and then took the post of assistant State Attorney General for Consumer Protection, a position he held until 1985.  Espy is a member of Sigma Pi Phi fraternity.

The following year Mike Espy won the 2nd Congressional District seat which included much of the Mississippi Delta, becoming the only black Congressman to represent a predominately rural district.  Espy carried the vast majority of the black vote but also attracted significant white support which two previous African American candidates had failed to do.  Espy stressed economic development issues for his rural constituents and was often at odds with the Congressional Black Caucus.  He became, for example, the first black federal lawmaker to appear in an advertisement for the National Rifle Association. He also worked with then Arkansas Governor Bill Clinton to develop the centrist Democratic Leadership Council which most black lawmakers avoided.  Nonetheless Espy was reelected by his mostly black constituents three times.

In 1993, President Bill Clinton appointed Espy Secretary of the Department of Agriculture. During his tenure, he was credited with turning the USDA around and ushering a new wave of reform for the department. This was considered an especially daunting task due to the drastic change in the number of farms across the United States and the archaic bureaucratic system that had plagued the department since the 1930s.  Espy resigned from the post in December 1994, three months after Independent Counsel Donald Smaltz began a probe of Espy for bribery.

Three years later, in August 1997, Mike Espy was indicted for bribery by Independent Counsel Smaltz.  He was acquitted of all criminal charges on December 2, 1998.  Although he was found not guilty in his own bribery trial, Tyson’s Foods and Sun Diamond Growers of California were found guilty of giving Espy illegal gifts and were fined $1.5 million dollars.  Sun Diamond appealed the case which eventually reached the U.S. Supreme Court,which reversed the conviction.

In 2018 Espy ran for the U.S. Senate in a special general runoff election but was defeated by Republican Incumbent Cindy Hyde-Smith in a controversial race that drew national attention.