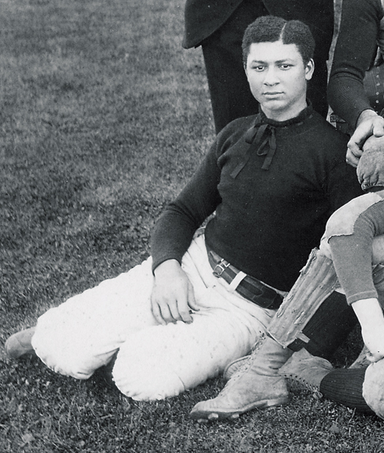 Ernest Houston Johnson was the first African American to graduate from Stanford University, a young man whose promise of an extraordinary professional career was cut short. His signal achievement at Stanford and the details of his abbreviated life had essentially been forgotten for more than a century.

It had long been an intriguing mystery as to who had been the first black to matriculate and graduate from Stanford but it was not until 1995 when the university tasked the director of its Black Community Services Center (BCSC) to produce answers. A student researcher employed by the center discovered an archival group photo that included Johnson. Further research by black alumnus and chemist Milt Ritchie unearthed enough details to paint an interesting portrait of a bright, handsome man, a sure recruit for the “talented tenth”.

Ritchie found that Johnson was born near Roseville, California in on March 31, 1871, the “affable” youngest of the four sons of Mr. Beverly Johnson, owner of a catering business. Though his father only had a third-grade education, he was nonetheless self-educated and delighted in reading Shakespeare. He had high expectations for his son so instead of placing him in the local all-black elementary school, he was able to get the boy enrolled in its better equipped white counterpart which had earlier rejected his older sister.

Graduating from high school in 1889, Johnson applied to the University of California at Berkeley and Stanford. Berkeley accepted him but Stanford ignored his application. Fortunately, his father had once worked for the Central Pacific Railroad and had catered affairs for the family of his former boss, wealthy industrialist and former California Governor, Leland Stanford, founder of Stanford University. The family had been known for its abolitionist sympathies. So, it was not surprising when the industrialist’s wife, Jane E. L. Stanford, personally intervened and contacted University President David S. Jordan on the applicant’s behalf. Shortly thereafter in 1891 Johnson entered the university.

Johnson was known to have participated in several extracurricular activities. Athletic, Johnson played on the university’s football team and worked as a printer’s apprentice to pay expenses. Majoring in economics, he earned his bachelor’s degree at Stanford in 1895 then proceeded to enroll in classes at the university’s law school. But Johnson would not live to fulfill his dream to become an attorney. Three years after graduation he contracted tuberculosis and died February 17, 1898 at the age of 26. Whether it was his or his family’s decision to do so, Johnson’s diploma was put in his casket and buried with him.

A century after Johnson’s death and the discovery that he had been the first student to attend and graduate from the university, students on campus wore T-shirts that read “Stanford, Black Since 1891.” Nine years after reporting his findings on Johnson, Ritchie and the BCSC arranged to have a granite marker placed on Johnson’s previously unmarked grave in the Sacramento City Cemetery. At a ceremony on April 17, 2004, in the presence of descendants of his sister and others, Johnson’s accomplishments were celebrated, and he was remembered as an authentic academic pioneer.