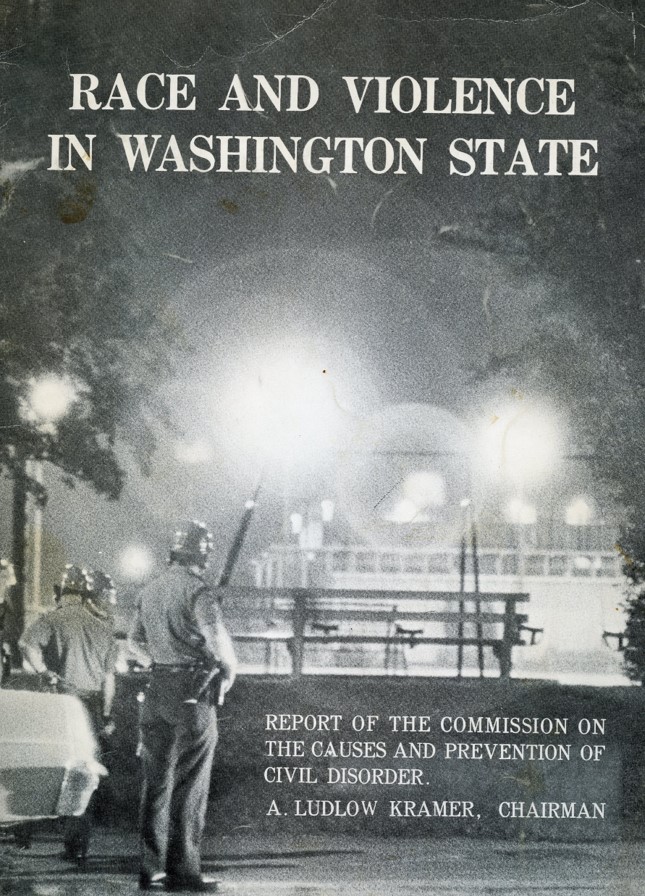 Race and Violence in Washington State, 1969

The report, Race and Violence in Washington State, published in 1969, was undertaken by the Washington State Commission on the Causes and Prevention of Civil Disorder. The Commission was established by the Urban Affairs Council on April 25, 1968 in response to the widespread racial disorders, or riots, that erupted in cities nationwide between 1964 and 1967.  That national crisis led to the 1967 Kerner Commission Report. The Commission on the Causes and Prevention of Civil Disorder was tasked with performing a similar role at the state level, educating public leaders regarding Washington’s potential for racial disorders and investigating why there had not yet been any significant disturbances in Washington. The Commission also rectified a perceived failing of the Kerner Commission by investigating what steps were already being taken to prevent disorders and their effectiveness.

Race and Violence in Washington State, also known as the Kramer Report, after A. Ludlow Kramer, the then Washington State Secretary of State, was organized into six chapters: “Causes of Disorder” in which the commission evaluated a range of theories on the causes of riots, or racial disorders; “An Overview of Washington State” explored why Washington had not experienced any serious disturbances, as well as the existing factors that could lead to riots in the future; “Importance of Attitudes” covered the nature of racism in Washington; “Washington’s Situation in Detail” elaborated on “Overview,” with an in depth analysis of the extent of segregation, discrimination and inequality in Washington and other factors that put black communities at a disadvantage; “What is being done?” covered what steps were taken to alleviate the causes of disorder; “What should be done” contained a wide range of suggested reforms, restructurings, legislation, and financial commitments designed to radically and severely decrease or eliminate the underlying causes of the inherent inequality of black life in America. Lastly, “What you can do” served as a concise conclusion regarding what an average citizen could do to lessen discrimination.

The commission concluded that providing “equal opportunity to the equally qualified” and an end to discrimination would not be enough to end inequality.  Instead, it believed that only by creating more “qualified people,” by ensuring economic stability and integrating communities would black folk be able to stand on equal footing with the white middle class. As such, it called for reforms to education, housing, welfare, and taxes. It called for the creation of new anti-discrimination legislation and new government offices to respond to community complaints as well as a reworking of civil service exams; for the overhaul of police training as well as court and prison reforms. It suggested that media reevaluate how it covered black life, and called for a total reworking of business hiring practices, particularly where arrest records were concerned. The report concluded that strides toward equality would be borne out in numbers: the rate of gainful black employment and black business ownership, how integrated housing had become, how integrated black communities were within the greater urban community, and the quality of education a black student received. Strikingly many of the descriptions and prescriptions of the 1969 report continue to apply to today’s racial environment in Washington state.

Bradley, A. (2018, March 03). Race and Violence in Washington State: The Report (1969). BlackPast.org. https://www.blackpast.org/african-american-history/encyclopedia-entry-type/race-and-violence-washington-state-report-1969/