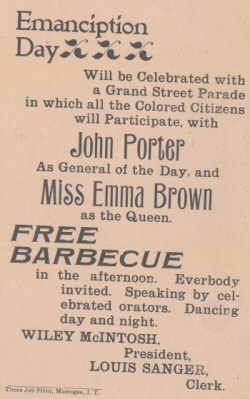 On August 4, 1865, the Loyal Creek Council formally declared that African Creeks would be considered full citizens of the Creek Nation.  African Creeks soon designated August 4th “Emancipation Day” and organized celebrations, including picnics, parades and speakers beginning as early as 1867, which continued through the Territorial days and early years of Oklahoma statehood.  The celebration fell into disuse as the African Creeks and other Indian freedpeople were increasingly marginalized in the twentieth century.  The celebrations have been revived recently as the freedpeople of the various Indian nations struggle for tribal recognition.  The action of the Creek Council was nearly a year before the Creek Treaty of 1866 was ratified.  Under Article II of that treaty, African Creeks were given full citizenship rights, including “rights to the soil” and the right to share equally in the division of tribal monies.

The 1866 Treaty was the culmination of a process that began in the summer of 1861 when Opothleyahola, an Upper Creek leader, declared that any slave who joined his party in opposing the Creek Confederate treaty would be considered free.  The Loyal Creeks had also negotiated an earlier treaty with the United States in the summer of 1863 with essentially the same language as the 1866 treaty regarding African Creek rights.  The Creeks finally rejected that treaty after the U.S. Senate altered it with unacceptable amendments regarding a proposed land cession.