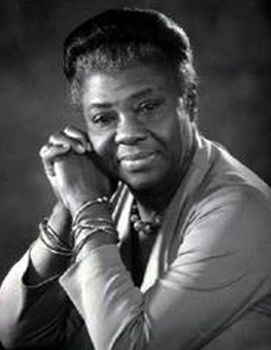 Elma Lewis is an influential educator and advocate for the arts.  Born in 1921 in Boston, Massachusetts, she was the daughter of immigrant parents from the West Indies.  Lewis, a product of the Boston public school system, earned a Bachelors of Arts from Emerson College in 1943 while working as an actress.  She continued her schooling, earning a Master’s in Education in 1944 from Boston University.

After teaching dance and drama for a few years, Lewis opened the Elma Lewis School of Fine Arts in 1950 in the Roxbury neighborhood of Boston.  Originally housed out of an apartment, the school quickly grew and expanded.  Lewis formed a friendship with Eli Goldston and was able to have the old Hebrew Academy and Synagogue building in Roxbury appraised at 1.4 million and then donated to become the site of the Elma Lewis School.

Lewis taught ballet to impoverished kids in Roxbury partly to show them the possibilities of their bodies and minds and thus remind them that they could overcome their circumstances. Her students went on to careers in entertainment, the arts and some have opened their own specialized schools as well.  Students like Ipyana Wasret, a renowned art curator, and writer Sayif M. Sanyika, credit their success to the foundations they obtained from Lewis’ school.  To expand the arts in her community and get drug dealers out of the area, Lewis created a summer theater program, Playhouse in the Park, and brought in musicians ranging from Duke Ellington to the Boston Pops Orchestra.

In 1968 Lewis founded the National Center of Afro-American Artists (NCAAA) as an umbrella organization for her school and similar programs throughout the nation.  Although the Lewis school closed in 1986, the NCAAA continues to carry out the mission she envisioned.

In 1981 Lewis was awarded a MacArthur Foundation Fellowship for her work in cultural development in Boston’s Roxbury.  She also received the Presidential Medal for the Arts from President Ronald Reagan for her work.  Lewis has served as a trustee for the Massachusetts College of Art and as a member of the Museum of Fine Arts in Boston.

On January 1, 2004, Elma Lewis passed away at the age of 82 in her Boston home from complications stemming from diabetes.