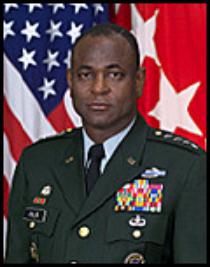 Larry R. Ellis served as a general in the United States military from 1969 to 2004. Ellis was the highest-ranking officer of African ancestry in the U.S. Army as of his retirement in 2004, and was the fourth black individual to become a four-star general. He was born in 1946 in Cambridge, Maryland, and attended Morgan State University, where he earned a Bachelor of Science. On February 5, 1969, he became a second lieutenant.

Ellis received his Master’s of Science in Physical Education from Indiana University in 1975. He had an extensive military education, including Infantry Officer Basic courses in 1969 at Fort Benning, Georgia, and Infantry Officer Advanced courses in 1974. In 1979 he attended Armed Forces Staff College, and the United States Army War College in 1986.

Ellis was stationed in several countries outside the United States including South Vietnam and South Korea. In Germany, his command assignments were the 1st Armored Division and Brigade Commander, 3rd Infantry Division. His command assignments in the United States were Battalion Commander, 5th Infantry Division at Fort Polk, Louisiana and 82nd Airborne Division at Fort Bragg, North Carolina. He was assigned to the Multinational Division (North) in Bosnia and Herzegovina. He was also the Assistant Division Commander of the 2nd Infantry Division in South Korea and the Company Commander of the 101st Airborne Division in South Vietnam.

The second black General to hold the position, after General Colin Powell, Ellis was the Commanding General of the United States Army Forces Command beginning November 19, 2001. He coordinated the deployment of over 500,000 soldiers from 2001 to 2004, as well as the shipment of more than a million tons of equipment. Through his efforts to communicate with diverse groups, Ellis was able to receive the support for his operations at that time. Over the course of his career, Ellis coordinated training programs, strategic plans for the Army, as well as programs that lasted for multiple years.

General Ellis has received many military awards, including the Defense Superior Service Medal, Army Distinguished Service Medal, Vietnam Cross of Gallantry, NATO Medal, and the Bronze Star Medal. Ellis also received a number of awards, including an Honorary Master of Strategic Studies from the U.S. Army War College, an Honorary Doctor of Law from Morgan State University, and the NAACP National Service Award.

After his retirement from the U.S. Army in 2004, General Ellis held several leadership positions in business including CEO and founder of Ellis Services & Solutions Enterprises. He has served on the Board of Directors of SRA, Armed Forces Benefit Association, UNITECH, as well as DHB Industries, Inc. He became the president of DHB Industries, Inc. in 2005, and in July 2006 he was named CEO.