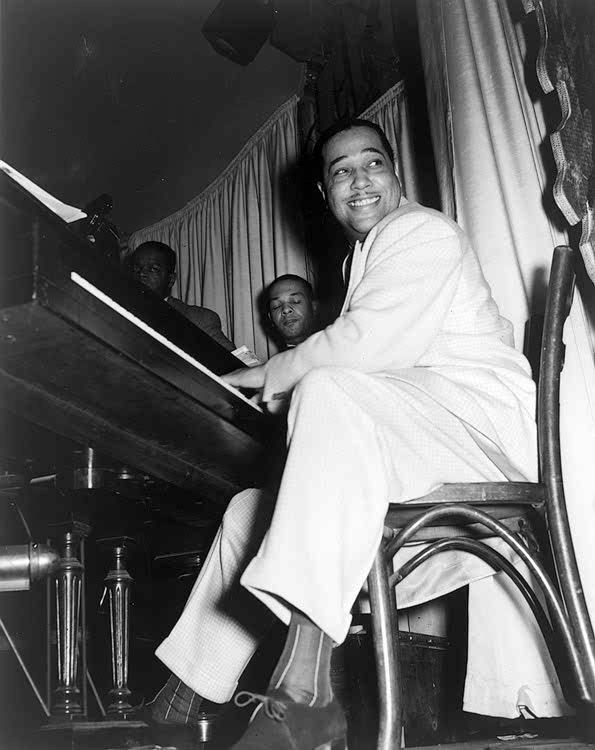 Edward Kennedy “Duke” Ellington is one of the greatest jazz composers, performers, and bandleaders in American history.  His compositions, and the travels of his band, exposed the world to jazz and earned him the nickname, “The Ambassador of Jazz.”

Edward Kennedy Ellington was born in Washington, D.C. in 1899 to Daisy and James Ellington.  Ellington’s parents appreciated good manners, dress, food, and a love of music (both played piano, though neither could read music) and diligently passed these characteristics on to their son.  This “duked up” appearance earned him the nickname “Duke” growing up, and it stuck for the rest of his life.  Starting with piano lessons at age six, and continuing with private lessons from local bar players, Duke developed a love and talent for ragtime music.

In 1917 Ellington formed his first band, “Duke’s Serenaders,” which played dance halls throughout the Washington, D.C. area.  The band became so popular that in 1923 Ellington moved it to New York and renamed it ‘The Washingtonians.”  Ellington arrived in New York just when jazz emerged as the dominant musical style of the Harlem Renaissance.  Jazz was a much more complex, improvisational genre than ragtime.  Ellington, sensing the change in musical styles and tastes, attracted to the Washingtonians some of the greatest jazz musicians in the country including “Bubber” Miley, “Trick Sam” Nanton, Harry Carney, and Johnny Hodges.  He also wrote music that fit each player’s style.  By 1927 the Washingtonians played regularly at prominent Harlem nightspots including the Club Kentucky, the Exclusive Club, the Plantation Club, and most importantly, the Cotton Club.  The Cotton Club engagement led to the band’s weekly radio program bringing Duke Ellington’s sound to the entire country.  In 1931 Ellington’s all-African American band hit the road playing jazz shows across the United States and Europe while recording albums and appearing in movies.

Teaming with Billy Strayhorn, Ellington composed some of the greatest pieces in jazz music, and unlike the customs of the time, formally wrote his music down.  Among his hits were “East St. Louis Toodle-Oo,” “Mood Indigo,” “Rocking in Rhythm,” “Black, Brown and Beige,” “Solitude,” “The Mooche,” and “Take the A-Train.” Ellington tried unsuccessfully to write different versions of jazz later in his life that fit classical and religious molds.  His efforts brought him recognition and respect from some of the best known classical composers in the world.  In 1943 Ellington’s band played Carnegie Hall in New York City.  Thirteen years later his performance at the 1956 Newport Jazz festival in Rhode Island put his face on the cover of Time magazine. In 1969 on his seventieth birthday, “Duke” Ellington was awarded the Presidential Medal of Freedom by President Richard Nixon. Ellington was a member of Alpha Phi Alpha Fraternity.

By the time of his death in 1974, Edward Kennedy “Duke” Ellington was considered one of the greatest composers in the United States and one of the key figures in the growth and sustained success of jazz.