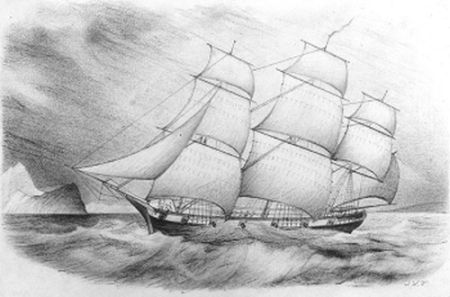 In the account below historian Lorraine McConaghy uses the story of black sailor Robert Shorter to indicate that while the Civil War freed nearly four million slaves, it also set in motion the status decline of antebellum African American seamen.

The eleven years Robert Shorter served in the U.S. Navy tell us much about the profound change affecting him and all black sailors during the Civil War. Shorter served on the sloop-of-war DECATUR throughout that ship’s commission in the Pacific Squadron, 1854-1859, and continued to serve in the Navy during the Civil War, first on the frigate BRANDYWINE, and then on the steamer FAHKEE, through the war’s end in 1865. His experience is typical of many free black men whose skills on warships under sail earned him a responsible antebellum position, only to lose ground because of the ascendancy of steam-powered warships and seagoing prejudice against unskilled black sailors, often escaped or recently freed slaves or “contraband” as they were often called.

At the time of his enlistment on the sloop-of-war DECATUR, Robert Shorter was forty-one, and thoroughly experienced at sea. In late December 1853, he reported on board the receiving ship in Boston’s Charlestown Harbor, and was required, like all sailors, to pass a variety of tests of character, health, and skill. The officers on the receiving ship were to guard against enlistment of “improper, unsound or incompetent persons” or any man “known to be convicted of a felony,” or who was drunk at the time of his enlistment.

Like every recruit, Shorter underwent a rigorous physical examination, demonstrating that his hearing, vision and speech were “good.” He was then stripped naked for the navy surgeon’s inspection where he was directed to “move about, exercise [his] limbs,” to show that he had “free use” of them. If he suffered from epileptic seizures, or had visible tumors, or if he had ever received a head wound “which may produce occasional insanity,” he was to be rejected. Shorter would have been vaccinated against smallpox, if he didn’t exhibit the telltale scarring from surviving that disease. Then Shorter signed or, if illiterate, made his X on the shipping articles, his contract, and received a small advance in pay to outfit himself with blankets, regulation clothing, and other gear. Robert Shorter passed all these requirements, and on January 10, 1854, he rowed out to the DECATUR anchored in Charleston harbor with 49 other seamen, 29 ordinary seamen, 14 landsmen, and 5 ship’s boys. They were soon joined by 25 marines.

When he joined the DECATUR’s crew, Shorter was ranked as a seaman, an aristocrat of skill on the Navy’s sailing warships. A seaman was the highest ranked crewmember, just below the petty officers who were chosen from among the most experienced seamen. Men classified as “seamen” were required to have served at least four years at sea and were also certified meaning they had passed an examination of their seagoing abilities. Shorter exhibited mastery of the dozens of specialized skills on board a mid-century sailing ship, everything from tying intricate knots to setting and taking in sail to firing the ship’s carronades and fighting with small arms.

The DECATUR set off from Boston in January 1854, sailing out into a howling winter storm, in search of an overdue passenger steamer. The ship’s crew was raw, and the men were thrown together into the life-and-death necessities of sailing a 117’ long vessel with three masts of sail, through sleet and snow, into the teeth of the wind. Because of his experience, Robert Shorter was a vital member of his team. Sailors had to work together, acting under the officers’ shouted orders. Their lives depended on mutual trust.

The DECATUR had a group of six men, standing spaced along the man-rope slung beneath the port-side yardarm, some 80 feet above the deck. Another group stood along the starboard yardarm, on the other side of the mast. To slow the sloop-of-war and keep control of her in the gale, each man had to furl the icy sail at the same pace, wrestling it fold by fold and then tying it tightly in the bunt. A man’s mistake endangered everyone. Seaman, Robert Shorter scrambled up the icy rigging, racing up to the yardarm at the word of command, snow whipping around him in the bitter wind, and furled the sail in careful coordination. Shorter was also a member of his gun crew, responsible to help arm, aim and fire the 32-pound carronades on board since the DECATUR was a ship of war as well as a sailing ship. Shorter practiced with his gun crew nearly every day, and the men also trained in defensive and offensive maneuvers using the small arms: swords, pistols and rifles.

In five years of DECATUR medical records, middle aged Robert Shorter never reported any sickness to the ship’s surgeon though other, younger black sailors, like Dennis Sycamore, did. Shorter was 5’5” tall, the perfect height for a sailor, fit, compact, tough, and seasoned.

The DECATUR sailed from the Atlantic Ocean through the Strait of Magellan, to join the Pacific Squadron. The ship was then ordered from Hawaii to Puget Sound in Washington Territory, to show off the carronades and the howitzers, and enforce the treaties, protect white settlers, and discourage Native hostilities. The DECATUR was in Washington waters from October 1855 until June 1856, on the far side of the world from its Boston harbor.

Moored in Elliott Bay off the Pacific Northwest settlement of Seattle, the officers convened a series of summary courts martial to deal with disciplinary infractions. There, Irish–born ordinary seaman John Ryan was charged with disobedience and the use of “provoking and reproachful words” to Robert Shorter. The DECATUR’s logbook and muster roll do not provide the race or ethnicity of sailors and marines, but Shorter was called as a witness in a summary court martial and his race is made clear in the testimony.

John Ryan and Robert Shorter were members of a party of DECATUR sailors ordered to gather firewood on shore in Seattle, fuel for the ship’s heating and cooking stoves. Ryan bought a bottle of whiskey or brandy back in the woods behind the tiny settlement, and got drunk. He loudly “cursed the ship, the flag and the country,” and yelled that he wanted “to get out of this damned ship.” It was February 1856, rainy and cold. Shorter just wanted to finish the work, and told Ryan to either help or get out of the way. The Irishman yelled at Robert Shorter, calling him a “black son of a bitch.” Those were “provoking and reproachful words,” and their use violated the U.S. Navy’s code of conduct. Ryan then threatened Shorter with violence, and he was arrested and held in irons on the DECATUR until his court martial was convened. Shorter was called to testify, and his words were recorded by the judge advocate:

We were on the wharf at Seattle, and…the boatswain’s mate was hurrying us. I told [Ryan] to get out of the way. He said, “You damn black son of a bitch, I’ll kick your head off you.” Brennan and Sprague caught hold of him as he picked up a stick of wood to strike me with.

Shorter outranked Ryan. As an ordinary seaman, Ryan earned $14 per month while experienced seaman Shorter earned $18 per month. Ryan likely resented Shorter for his position, his pay, and his race. But Ryan was convicted on all charges, demoted to landsman, and docked three months’ pay.

Seaman Robert Shorter sailed on board the DECATUR for five years, from Boston to the Caribbean, to Norfolk, then down to Rio de Janeiro, through the Strait of Magellan, to Hawaii, Puget Sound, San Francisco, Panama and Nicaragua. He sailed through icy storms and tropical heat, through two mutinies, through an outbreak of scurvy, through the deaths of some of his shipmates from tuberculosis and dysentery. He saw action at Seattle, participating in the naval defense of the town against a band of Native men who attacked the settlement on January 26, 1856. It isn’t known whether Shorter stayed with his gun crew on board the ship at Seattle, firing a carronade throughout the day or whether he joined one of the shore parties, armed with rifles.

Hostilities ended on Puget Sound by late spring, and the DECATUR sailed south from Seattle in June 1856. Shorter reenlisted in August, in San Francisco, for another tour of duty on board the sloop-of-war. He was then 43 years of age. His captain accepted him and some other reenlisting landsmen, ordinary seamen and seamen. It is clear that Robert Shorter was a valued member of the DECATUR’s crew. Three years later, when the DECATUR went out of commission as a sailing ship, Shorter was considered one of the sober, capable, longtime man-of-war sailors.

The Civil War dramatically enlarged and transformed the U.S. Navy. Sailors like Robert Shorter were part of the “small but influential number of lifelong sailors” in the wartime Navy who knew the ropes, the lore and the traditions. The Civil War offered Shorter continued employment as a sailor but it also diminished his opportunities. When Shorter left the DECATUR in 1859, he was ranked as a seaman and at the Civil War’s beginning, in 1861, on the frigate BRANDYWINE, he was promoted to sail maker’s mate, making him for the first time a petty officer. However, by 1865, after the BRANDYWINE went out of service, Shorter was rated only a laborer on board the steamer FAHKEE. Many enlisted men, white and black, whose antebellum naval experience was in sail-driven warships did not advance in the ironclad, steam-driven Civil War. Sailing warships were rapidly replaced during the war by war steamers. Shorter ’s skills were no longer needed, and his race was a further disadvantage. On the FAHKEE, he sailed with an almost entirely black crew, many of them unskilled former slaves or contrabands.

In the antebellum Navy, Robert Shorter served in an integrated crew and his skills earned respect. His rights were protected against violation. Shorter was honored with rank, good pay and promotion. He did not sail in the U.S. Navy as a cook or servant, but as a highly skilled worker, a fighting sailor. But in the wartime Navy, Shorter was grouped with other men of color, seen more as a black man than as a seaman. In part, the Civil War was fought to free four million slaves, and to establish a “new nation” in which black men would be social, political and economic equals of white men. It is a sad irony that Robert Shorter, a free and skilled black man, lost ground in the U.S. Navy during the Civil War. In the sailing navy, Robert Shorter was respected; in the steam navy, he was demoted. There was no longer a need for the skills of a sailmaker, no more sails to be furled or mended.