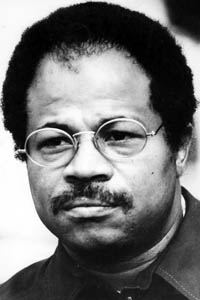 Lonne Elder was a playwright, screenwriter, and actor. Born December 26, 1927, in Americus, Georgia, to father Lonne Elder II and Quincy Elder. When Lonne was still an infant, his family moved to New Jersey. At the age of ten Elder’s parents died, he and his four siblings were sent to live with his aunt and uncle in Jersey City.

In 1949 Elder enrolled at New Jersey’s Teachers college but dropped out in less than a year. Elder learned how to gamble by following his uncle who ran numbers, and at the age of 19 he moved to Harlem and became a professional gambler as well as a waiter and telephone clerk. In New York he enrolled in the New School for Social Research. In 1952, Elder was drafted into the US Army and was stationed near Fisk University in Nashville, Tennessee. This is where he met the poet and playwright Robert Hayden. Inspired to write by Hayden, Elder moved back to New York in 1953 (once he left the Army) and began to study acting.

In 1959 Elder made his first appearance on Broadway, in the show A Raisin in the Sun. After acting in the show, Elder decided to write his own plays. He drew on his own experiences, including the life of his uncle the number runner, and wrote the play Ceremonies of Dark Old Men in 1965. In 1967, he became the head of the Negro Ensemble Company’s playwright unit. The first show they debuted was Elder’s Ceremonies of Dark Old Men in 1969. First showing in the St. Mark’s Playhouse, then moving onto Broadway.

In 1963, Elder married Betty Gross and had a son named David Elder. The couple divorced in 1967, and Elder then wed Judyann Johnson in 1969, one of the cast members in the original production of Ceremonies of Dark Old Men. Together they had a son, Christian, and a daughter, Lonnie.

Elder left Broadway and started to write for Hollywood, California in 1971, when he wrote the film Melinda. The following year he wrote the film Sounder. He wrote other screenplays for Hollywood but was eventually ostracized by studio executives in the 1980s for his efforts to break from the norm on how blacks were depicted in film. He wanted to break the racist stereotypes in Hollywood. Though he was still employed by studios, he didn’t write anything significant until he was asked to help rewrite the book King into a play in London, UK in 1990. The play depicted the life of Rev. Martin Luther King, Jr. as a musical. In 1995, Ceremonies of Dark Old Men was revived in Long Wharf Theater in New Haven, Connecticut.