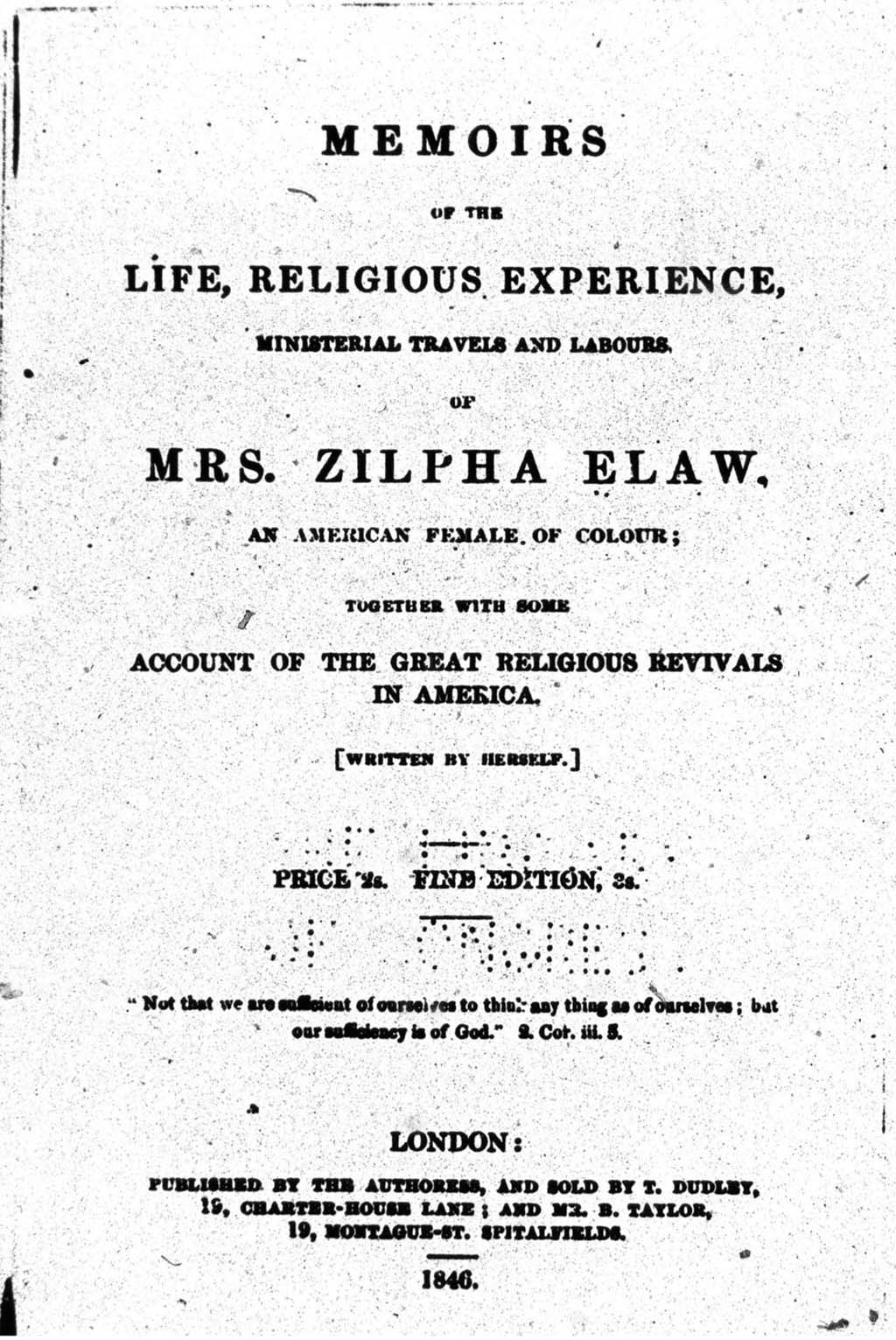 Zilpha Elaw was born in 1790 to free black parents in Pennsylvania. One of twenty-two children, she was raised in a strong Christian home until age twelve, when her mother unexpectedly passed away and young Zilpha was sent to live with Pierson and Rebecca Mitchell, a Quaker couple who became her adoptive parents. Amidst this instability, she embraced the Methodist tradition and became a member of the church as a teenager.

At twenty, Zilpha married Joseph Elaw, who worked as a fuller (a trade that softened raw cloth using urine) in Burlington, New Jersey. The couple’s only daughter, Rebecca, was born a few years before Zilpha suffered the loss of Hannah, her older sister. It was Hannah’s deathbed premonition of her sister preaching that encouraged Zilpha Elaw to preach her first sermon at a camp meeting in 1819. She hid this calling from Joseph for a time.

Things changed in 1823 when Joseph Elaw succumbed to illness, leaving behind an eleven-year-old Rebecca and her mother, who felt the call to preach again. Transitioning out of her role as a stay-at-home mother, Zilpha threw herself into service. For nearly two decades, she worked as a domestic servant to provide for her daughter, opened a school for black children with Quaker support in Burlington, and traveled extensively as an itinerant preacher. Elaw’s circuit carried her as far north as Maine and as far south as Virginia, allowing her to address slaveowners and the enslaved, white and black, women and men alike. Her memoir recounts what it was like to be a woman of color traveling alone across the country, narrowly escaping threats of violence, imprisonment, and enslavement.

After nearly twenty years of preaching in America, Elaw relocated to the United Kingdom in 1840 to continue her ministry. Although the British had abolished slavery in 1833, Elaw did not explicitly preach an abolitionist message. Nonetheless, her presence in England was often seen through the lens of her race. In 1846, she published Memoirs […] of An American Female of Color which contains most of the information known about her life and was one of the first autobiographical works published by a black woman.

Though accounts of her British ministry are scarce, records indicate that Elaw was settled in London by 1850 with her second husband, a white man, Ralph Bressey Shum, who died four years after their marriage. Continuing to preach across rural England into the 1860s, she even had a chapel built in London to further her ministry. By the early 1870s, census records indicated that Elaw was suffering from partial paralysis and dementia, requiring a caretaker to accomplish daily tasks. Still living in London, and after a career of service spanning half a century, Elaw passed away on August 20, 1873 at 83 years of age.