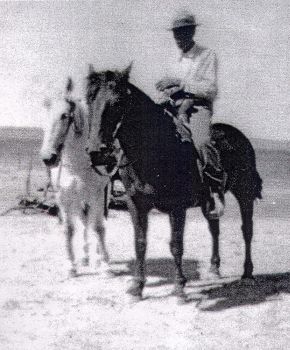 James Edwards was one of the most successful African American homesteaders in the state of Wyoming.  Born in Ohio on February 14, 1871, local tradition in Wyoming suggests that prior to venturing west, Edwards had served in an African American cavalry unit in Cuba, though no documentation has been found to substantiate the claim.

In 1900, Edwards accompanied his father and a group of Italian miners westward in response to eastern newspaper advertisements of work at the Cambria coal mine in Newcastle, Wyoming.  After being driven away from the mine, Edwards walked south to the area near Lusk, finding work on March 31, 1903 on Eugene Bigelow Wilson and George Luther Wilson’s Running Water Ranch on the Niobrara River in present day Niobrara County, Wyoming.   He was regarded by the owners of the ranch as a good and trustworthy worker, sheepman, and horse trainer.  Edwards worked on the Wilson Brothers’ ranch until December of 1914.  By the end of his employment on the ranch he had been promoted to foreman, putting him in a supervisory role over white employees.

Edwards married Lethel Dawson in Denver in 1914.  Near the end of his tenure as employee of the Running Water Ranch, a financial dispute arose between the ranch owners and Edwards, leading to a lawsuit which Edwards eventually won.  The Wilson Brothers helped Edwards settle on a homestead of his own in the Harney Creek area.  Edwards had received a patent for 90 acres surrounding his cabin, a year earlier, in 1913.

The Edwards ranch was prosperous during the early-twentieth century, allowing James and Lethel Edwards to expand their house and enjoy technological innovations.  They were the first in the Lusk area to have piped hot and cold running water and an indoor shower.  They were also the first family in the Lusk area to own a telephone, radio, and a pressurized kerosene cook stove.

Edwards’s cattle brand was named the sixteen bar one, representing the ratio of white men to black men in the area.  The success of the Edwards ranch has been attributed to both the ranching skills of James, as well as the personal and business decisions that he and Lethel made.  The Edwards were also influential in encouraging other African Americans to settle in the Lusk, Wyoming area. Their ranch remained prosperous until Lethel’s death in 1945, causing James to allow the ranch to fall into disrepair and forcing Edwards to sell off most of his ranch, buildings, and holdings and move to nearby Scottsbluff, Nebraska.

Edwards received some notoriety when he was featured in a 1949 Ebony Magazine article entitled, “The Last Days of Jim Edwards.”  James Edwards died in Scottsbluff on January 6, 1951 just weeks shy of his 80th birthday.