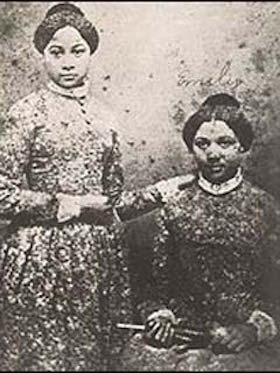 Mary Edmonson (1832–1853) and Emily Edmonson (1835–1895) were enslaved African Americans who became prominent in the United States abolitionist movement after gaining their freedom. On April 15, 1848, they were among the 77 slaves who tried to escape from Washington, D.C. to New Jersey on the schooner The Pearl.

The Edmonson sisters were the daughters of Paul and Amelia Edmonson, a free black man and enslaved woman in Montgomery County, Maryland. At the ages of 15 and 13, the sisters were hired out to work as servants in two elite private homes in Washington, D.C. under a lease agreement that required their wages go to their owner.

On April 15, 1848, the sisters and four of their brothers joined 71 other slaves on The Pearl in what was the largest escape attempt by enslaved people in U.S. history. A posse organized by Washington, D.C. area slave owners captured The Pearl on Chesapeake Bay at Point Lookout, Maryland, and towed the ship and its cargo back to Washington, D.C.

The Edmonson sisters and the other 75 slaves were sold and sent to New Orleans where their new owners, slave trader partners Bruin & Hill displayed them on an open porch facing the street hoping to attract buyers. A yellow fever epidemic struck New Orleans, forcing Bruin & Hill to send the two girls back to Alexandria, Virginia, to protect their investment.

Paul Edmonson meanwhile continued his campaign to free his daughters. When Bruin & Hill demanded $2,250 for the sisters’ release, Edmonson traveled to New York City and met with members of the American Anti-Slavery Society who told him to take his plea to Reverend Henry Ward Beecher, a prominent abolitionist and pastor of the Plymouth Congregational Church in Brooklyn, New York. Edmonson convinced Rev. Beecher and church members to raise funds to purchase the girls and free them.

The Edmonson sisters were emancipated on November 4, 1848. Plymouth Congregational Church continued to contribute money for their education. They were enrolled in the coed and interracial New York Central College in Cortland, New York, in August 1850. While there, they attended the Slave Law Convention in Cazenovia, New York, to protest the proposed Fugitive Slave Act of 1850. There they met Frederick Douglass and were introduced to the abolitionist movement.

The Edmonson sisters continued their education at Oberlin College in Ohio in 1853. Six months after entering Oberlin, Mary Edmonson died of tuberculosis at the age of twenty. Emily Edmonson returned to Washington, D.C. and continued her studies at the Normal School for Colored Girls.

In 1860 Emily Edmonson married Larkin Johnson, and, after living 12 years in Sandy Spring, Maryland, they moved to Washington, D.C., purchasing land in the Anacostia neighborhood in the southeastern section of the city and becoming founding members of the mostly black Hillsdale community. Emily Edmonson maintained her relationship with fellow Anacostia resident Frederick Douglass, and both continued working for African American civil and political rights.

Emily Edmonson died on September 15, 1895, at her home in Anacostia, seven months after the death of her more prominent neighbor, Frederick Douglass.