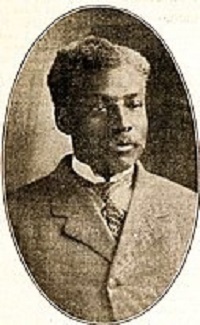 Jefferson Lewis Edmonds was a prominent newspaper editor and political activist in late 19th Century Los Angeles.  Edmonds was born a slave and worked for 20 years in tobacco and cotton fields in antebellum Virginia.  Once freed in 1865 Edmonds relocated to Crawfordsville, Mississippi in where he pursued an education in a series of “freedman schools.”  In 1875, at the age of thirty, Edmonds began teaching in the black schools of Mississippi and continued this work until 1888. He also bought a small farm in Northern Mississippi about 35 miles south of Memphis, Tennessee and was active in local politics.

Growing increasingly disenchanted with post-Reconstruction Mississippi, Edmonds moved west and arrived in Los Angeles around 1890.  In 1896 Edmonds published his first newspaper, the Pasadena Searchlight.  He used the paper to support the candidacy of William Jennings Bryan, a Democrat, when the vast majority of Southern California’s African Americans were Republicans.  The outcry over his support of the Democratic Party led his partners to hire another editor.

In 1900 Edmonds started a second paper, the Liberator, in Los Angeles. The Liberator, which operated for fourteen years, was known for its support of working class black Angelinos, fought for civil rights, and supported candidates of any party who he felt supported African American community objectives.  Edmonds was also a California “booster” who believed Southern blacks should migrate to Los Angeles both for economic opportunity and political freedom.  He wrote that Southern California was “ripe for advancing the race” and cited specifically the ability of blacks to own businesses and homes.  Edmonds viewed home ownership as especially important in the black quest for full citizenship.

By 1910, it seemed to some observers that the Liberator’s main purpose was to instigate migration to Los Angeles.  While the Liberator could not be held solely responsible for the influx of blacks into Los Angeles, the African American population increased from 2,131 in 1900, the year Edmonds started the newspaper, to 7,599 people in 1910 and 15,579 in 1920, giving the Southern California city the largest and fastest growing black population in the Far West.   .

Edmonds was involved in other activities designed to promote “race advancement.”  In 1903 he, Frederick Roberts, and Reverend J.E. Edwards created an organization called the Los Angeles Forum whose primary purpose was to challenge racial discrimination and consolidate black political power in Los Angeles.  Edmonds also played a significant role in the establishment of the National Association for the Advancement of Colored People in Los Angeles in 1913.