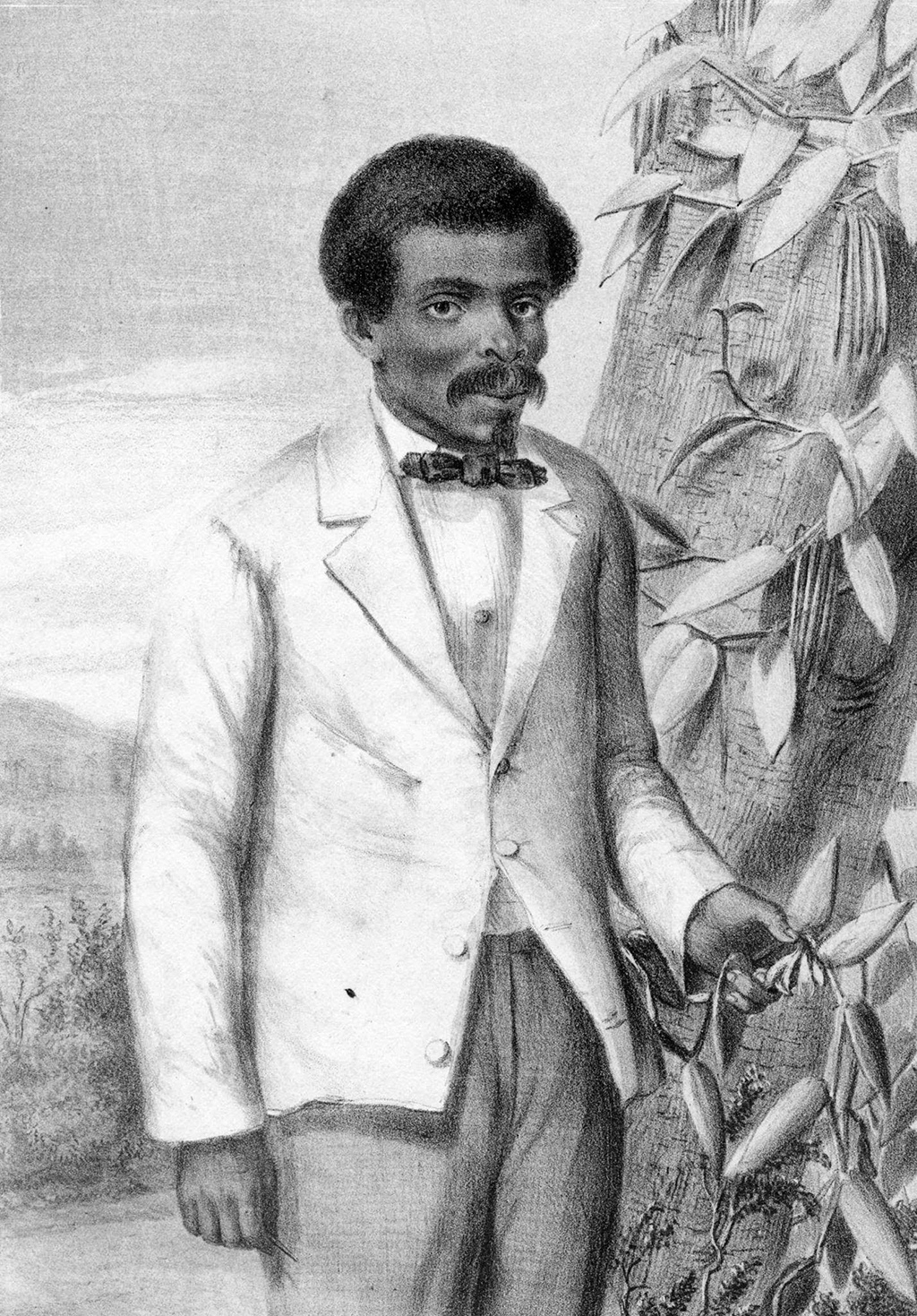 Edmond Albius was born a slave in 1829, in St. Suzanne, on the island Réunion. His mother died during childbirth, and he never knew his father. In his youth he was sent to work for Botanist Fereol Bellier-Beaumont.

The vanilla plant was flourishing in Mexico, and by the late 18th century, a few plants were sent to Paris, London, Europe and Asia, in hopes of producing the bean in other areas. Although the vine would grow and flower, it would not produce any beans. French colonists brought vanilla beans to Réunion around 1820.

Beaumont had been teaching young Edmond how to tend to the various plants on his estate. He taught him how to hand-pollinate a watermelon plant. Beaumont had previously planted vanilla beans, and had just one vine growing for over twenty years, but was also unable to produce any beans on the vine. Young Edmond began to study the plant and made a discovery. He carefully probed the plant and found the part of the flower that produced the pollen. Edmond then discovered the stigma, the part of the plant that needed to be dusted with the pollen to produce the bean. He used a blade of grass to separate the two flaps and properly fertilized the plant.

Shortly afterwards, while walking through the gardens, Beaumont noticed two packs of vanilla beans flourishing on the vine and was astonished when young Edmond told him that he was responsible for the pollination. Edmond was twelve years old at the time. Beaumont wrote to other plantation owners to tell them his slave Edmond had solved the vanilla bean pollination mystery. He then sent Edmond to other local plantations to teach other slaves how to fertilize the vanilla vine. Within the next twenty to thirty years, Réunion became the world’s largest producer of vanilla beans.

Edmond was rewarded with his freedom, and was given the last name Albius. Beaumont wrote to the governor, asking that Albius be given a cash stipend for his role in the discovery of the fertilization, but received no response. Albius moved to St. Denis and worked as a kitchen servant. He somehow got involved in a jewelry heist and was sentenced to ten years. Beaumont again wrote the governor on his behalf, and the sentence was commuted to five years, and Albius was subsequently released. A man named Jean Michel Claude Richard then set claim to have discovered the fertilization process before Albius. He claimed he visited the island in 1838, and taught a group of horticulturists the technique. Again, Beaumont stepped in and wrote to Réunion’s official historian declaring Albius as the true inventor, giving him all of the credit entirely. The letter survives as part of island history.

Albius returned to live close to Beaumont’s plantation and married. He died on August 9, 1880 at the age of 51 at a hospital in Sainte Suzanne. He never received any profits from his discovery. One hundred years after his death, the mayor of Réunion made amends by erecting a statue of Albius and naming a street and school after him.