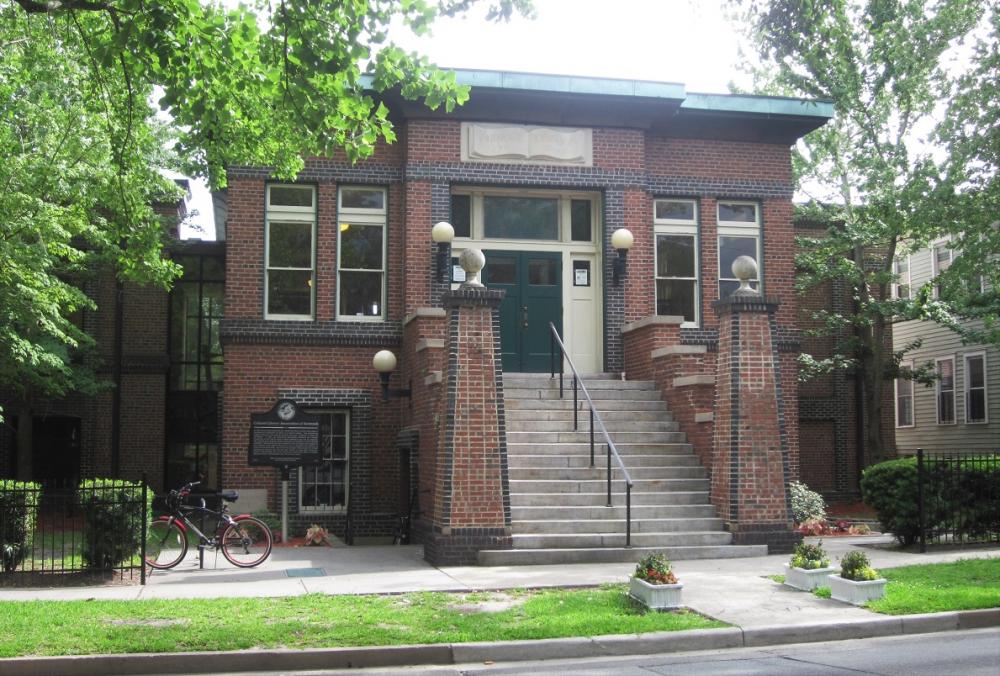 The East Henry Street Carnegie Library is a branch of the Live Oak Public Libraries in Savannah, Georgia. It originally opened in 1914 as the Colored Carnegie Library, one of twelve segregated public libraries in the south funded by philanthropist Andrew Carnegie and one of the earliest African American public libraries in Georgia. It was added to the National Register of Historic Places in 1974. Though temporarily closed in the late 1990s, it reopened in 2006 after a major restoration and expansion project.

The opening of Savannah’s Colored Carnegie Library in 1914 was a major step for the city’s African American citizens in their progress toward free library services. Their quest had begun ten years before, when the city established its first public library but prevented blacks from using it. As a result, the Colored Library Association of Savannah formed in 1906 and operated the Savannah Colored Public Library out of a doctor’s office on Hartridge Street. The Association’s twelve founding members included many of black Savannah’s professional, business, and cultural leaders. Although the library received an annual appropriation from the city, most of its collections were donations. But in 1909, after Andrew Carnegie offered the city $60,000 (later raised to $75,000) for a new main library on Bull Street, the Colored Library Association was encouraged to approach the philanthropist themselves. In August 1910, Carnegie offered them $12,000 for a small library. Savannah’s population at the time was 65,064, just under half of which were black. The Association used community donations to purchase a library site on East Henry Street, across from Dixon Park. Architect Julian de Bruyn Kops designed the building and local contractor D.P. Phillips built it.

The Colored Carnegie Library opened on August 14, 1914. Its inaugural librarian was Charles A.R. McDowell. Though its opening day collections consisted of only 3,000 volumes, the library immediately became an indispensable community institution among Savannah’s African Americans. It provided them with reading materials by black and white authors, programs to attend, clubs to join, and space for public meetings. While the library received support from the city, it remained supervised by a separate board until 1963, when Savannah desegregated its libraries. The Carnegie Library reopened as an integrated branch of the Savannah Public Library but continued to serve a predominantly African American clientele.

Margaret Walton Godley, Savannah Public Library History (Savannah, GA: Savannah Public Library, 1950); Cheryl Knott, Not Free, Not for All: Public Libraries in the Age of Jim Crow (Amherst, MA: University of Massachusetts Press, 2015); Robert Burke Walker Jr., Georgia’s Carnegie Libraries: A Study of Their History, Their Existing Conditions and Conservation (University of Georgia: Master’s Thesis, 1994). Acknowledgment: This project was made possible in part by the Institute of Museum and Library Services, grant #RE-31-16-0044-16.