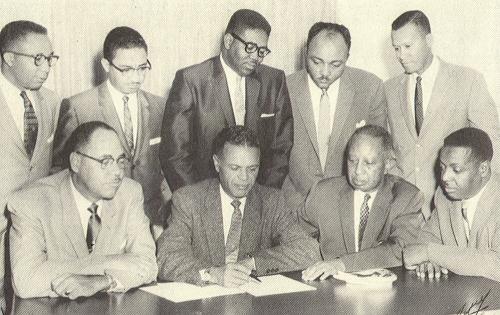 An important force in local and state politics in the Oakland, California region, the East Bay Democratic Club (EBDC) was founded in the late 1940s to help produce black political self-determination through electoral politics by organizing grassroots coalitions of East Bay African Americans.

Founded by Brotherhood of Sleeping Car Porters activist D.G. Gibson, the club also included pharmacist and future state assemblyman Byron Rumford, future judge Allen Broussard, future mayor of Oakland Lionel Wilson, Cuban activist Evelio Grillo, and C.L. Dellums, the longtime head of the Brotherhood. Though predominantly African American and mostly male, the EBDC had several white and Hispanic members, as well as a significant contingent of women. The EBDC focused on what was then the Seventeenth Assembly District, encompassing Berkeley and Oakland.  One of its early successes was electing Bryon Rumford as the district’s assemblyman in 1948. In 1958 the EBDC helped to organize a coalition with area labor unions to defeat a right-to-work initiative promoted by conservative Republican William F. Knowland, a U.S. Senator and publisher of the Oakland Tribune.

During the 1960s members of the East Bay Democratic Club played key roles in the Bay Area implementation of President Lyndon B. Johnson’s War on Poverty. Wilson and two other members, Norvel Smith and Don McCullum, headed programs associated with the Office of Economic Opportunity and helped African American residents take control of the Oakland Economic Development Council, the body that oversaw the implementation of the War on Poverty in Oakland.

The East Bay Democratic Club became skilled in constructing coalitions that crossed ideological and racial boundaries. One example was the successful campaign of Ronald V. Dellums for Congress in 1970. The EBDC helped craft a coalition of African Americans and antiwar whites that gave Dellums a victory over the Democratic incumbent in the primary and ultimately the seat itself in that year’s general election. In the early 1970s as the Black Panther Party turned to electoral politics, the EBDC eventually moved to build a coalition with them. In 1975 several club members worked on Panther Elaine Brown’s campaign for Oakland city council, a race she narrowly lost. That effort set up the 1977 run by EBDC co-founder Lionel Wilson for mayor of Oakland, which saw Wilson elected as the city’s first African American mayor with crucial support from the Panthers.

Though Wilson lost a 1990 bid for reelection, the club survived into the twenty-first century, and remains an important political force in the East Bay.