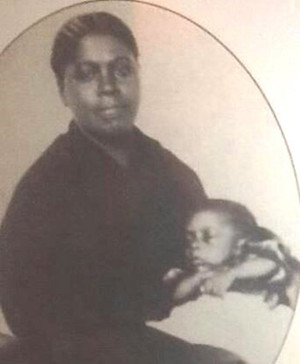 Henrietta S. Duterte with one of her children who died in infancy
Public domain image

Henrietta Smith Bowers Duterte (pronounced Dew-tier), the first female undertaker in the nation, was born free in Philadelphia, Pennsylvania. She was one of 13 children born to John Bowers and Henrietta Smith Bowers in July 1817. The Bowers family was originally from Baltimore, Maryland but they settled in Philadelphia around 1810.  Henrietta Bowers’ father became the sexton of the African Episcopal Church of St. Thomas.

Bowers grew up in Philadelphia’s “Seventh Ward,” a long narrow strip in center of the city that for nearly two centuries was home to the city’s most prominent African American neighborhood.  Seventh Ward was the section where scholar and activist W.E.B. DuBois lived and wrote The Philadelphia Negro, the nation’s first major study of black urban life.

Henrietta Bowers was a tailor who made capes, coats, and cloaks for the city’s middle and upper classes.  In 1852 at the age of 35 she married Francis Duterte, a Haitian-born local coffin maker. Together Henrietta and Francis had several children, but none survived infancy. Francis Duterte was a member of the Moral Reform Retreat, a local organization which supported the abolition of slavery and equal rights for women.

After the death of her husband in 1858, Henrietta Duterte defied the gender restrictions of her era by assuming control over her late husband’s business. In doing this, she became the first woman undertaker in the city, and the first woman undertaker in the nation. She conducted business in her own name. A surviving document, donated to The Library Company of Philadelphia, has this heading “To H.S. Duterte, Dr.; General Furnishing Undertaker, Address No. 838 Lombard Street.”

Like her husband, Henrietta Duterte worked to abolish slavery.  She became an agent of the Underground Railroad, often hiding runways in coffins or disguising them as part of funeral processions to ensure their safe passage through the city. She also supported the African American community through philanthropic projects.  For example she helped financially support the AME Church of St. Thomas and raised funds to pay the pastor’s salary.  She also funded Stephen Smith‘s Philadelphia Home for Aged and Infirmed Colored Persons and in 1866 she helped create the Freedman’s Aid Society Fair to assist formerly enslaved people in Tennessee.

Although she remained socially active throughout her life, Duterte gradually transferred the management of the business to her nephew, Joseph T. Seth. By the time of her passing in 1903, the company had become one the city’s most successful African American businesses, taking in about $8,000 per year by burying both blacks and whites.

Henrietta Duterte died in Philadelphia on December 23, 1903.  In the 1903 Register of Deaths in the City of Philadelphia, Duterte is listed as the undertaker for a young African American male who died just two days before her own death. When she died at the age of 83, her estate included the undertaking business, hearses, horses, carriages, burial lots in four cemeteries, and houses. Her nephew continued to operate the business until his death in 1927. She is interred in Eden Cemetery, the oldest black-owned cemetery in Pennsylvania.